Share All sharing options for: Fantasy Competitions: 3rd Round Leaderboards 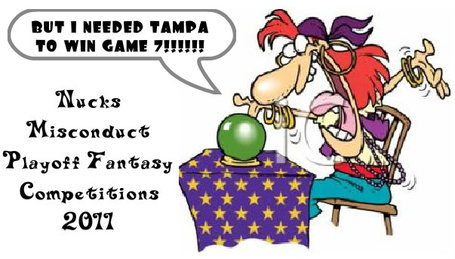 Well, it's the Vancouver-Boston series that many of us called for the Stanley Cup Finals. And before Game 1 starts tomorrow, here are the leaderboards for the fantasy competitions. If you want to check where you were sitting last time, go here. If you don't remember your picks, go here for the brackets and here for the players. For the current standings, head past the jump.

First up is the team brackets competition. Remember, calling the correct team is worth 5 points in this round, plus 3 bonus points for calling the number of games.

You know, I was all prepared to brag about being the only person to pick the Lightning as the Eastern Conference Champs, since I would've jumped from 17th into 3rd. Unfortunately, I have to settle for pointing out that mfarough has 14/14 matchups called perfectly so far, and is walking away with the obvious win. Chinese Canuck and isomicah did the best this round, calling the winners and games for both series. The majority of us picked the Canucks to win the Cup, so don't be surprised if the only movement next round is from calling the number of games it takes us.

So, onto the players competition.

British Canuck managed to hang on to that 3 point lead over Canucks1619, with both earning 44 points this round. This one could easily come down to the wire. The biggest move was by camcharron, whose 15 points this round made him drop from 5th to 17th.

Good luck in the final round, folks.