The Death Zone: A Look At The Boston Bruins

Share All sharing options for: The Death Zone: A Look At The Boston Bruins 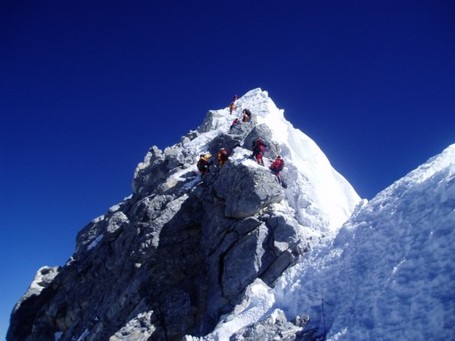 I watch a lot of documentaries because, well, I'm a giant nerd. Recently I've been on a Mt. Everest kick because I find it fascinating to watch mountaineers flirt with death for the simple glory of peering at the world from 29,029 feet. Such a dangerous traverse doesn't make a lot of sense unless you respect precisely how immensely difficult it is. In that manner it's similar to hockey: all the injuries, travel and sacrifice for close to a year in search of having your name engraved on a large chalice. Say both out loud and neither passes the logic test.

When the body passes 26,000 feet, it enters what mountaineers call "the death zone," an altitude where - in addition to fierce wind and crippling frostbite - they battle an atmospheric pressure so low that humans can't ever acclimate. With 1/3 the amount of oxygen that there normally is at sea level, the body uses the thinner air faster than it can be replenished. Even with supplemental oxygen, it takes only a matter of hours for the body to literally begin eating itself and many mountaineers succumb to the physical deterioration within only feet of their ultimate goal.

So consider this hockey's death zone: the final crucial steps to ascend to the top of the NHL world. Only one team is going to push through and reach the summit, so after the jump you'll get a better look at the guys standing in Vancouver's way.

Boston's first line is a bit like San Jose's: big, nasty and fast. Krejci plays the most of their forwards at 5v5 (16:71), on the powerplay (3.03) and is tied with linemate Horton for the lead in points (17). Krejci only had 13 goals in the regular season but is their leading goal scorer now (10, including four game winners), including a hat trick in game six against the Lightning. He's also tied with Ryder with the most takeaways in the post season (9) and is the team's second best face-off guy with a  51.7 FO%. Mike Keenan once compared Nathan Horton to Mark Messier, so considering Barry Trotz just recently viewed Ryan Kesler in the same mold, there's an interesting subplot to watch. Acquired last summer from the Panthers, Horton has become the only player in playoff history to score two game seven winners and his eight total goals have all come in Boston wins. Horton is also tied for the lead in PP points (3), has the second highest PIM total (35) and loves fan interactions of ALL shapes and sizes. Lucic is the power forward most teams would love to have and though his nine points (3-6) isn't much, Lucic spends the most time in the offensive zone of any skater at 66.5% OZone, the exact same amount as Burrows and Daniel Sedin. Lucic has a team-high 43 PIMS, 43 hits, 21 giveaways and also three misconducts, one less than Maxim Lapierre. I'm sure those two will make the best of friends in no time.

Their second line has all the makings of a line that can catch the opposition napping and make them pay for it. Marchand had a pretty rock solid rookie season (21-20-41) and has six goals and six helpers in the post season. He went on a five game point streak starting with the end of the Montreal series clear through the second round but has only scored once after that, finishing a -3 against Tampa. Marchard was born the same year linemate and B.C.-born Mark Recchi was in his rookie year with the Penguins. The oldest active player in the league, Recchi has seven points (2-5), but none since the end of the second round (he was pointless and a -5 against Tampa). Nevertheless, you have to be in awe of a 43-year-old averaging 14 minutes a game and delivering 27 hits since the opening round (for comparison Hansen and Burrows both have 26 hits). The age gap is bridged in the middle by Bergeron, the Bruins' best two-way forward. He has the second lowest offensive zone starts at 44.4% and is the third best from the dot in the post season in the league (62.8%). On the offensive side Bergeron had 12 points in the first two rounds and added two tallies in game four in the third round; ignoring Seguin he has the highest GFON/60 of all Boston forwards at 4.25. He also missed two games in the third round with a mild concussion on a hit from Philadelphia's Claude Giroux.

The knock against Ryder is consistency, but he's tied for fourth in points on the team (5-6-11) and that includes two game winners. He had seven points in five games between the second and third rounds, marking this as the third post season where Ryder's shook off his regular season struggles and been a post season force. Tied with Ryder in points is Chris Kelly (4-7-11), picked up during the Ottawa firesale in February. Kelly struggles with face-offs (44 FO%) and had his own thunderdome experience in the first round when Scott Gomez crushed him against the boards and he returned (and went on a scoring binge) with the cage. Lastly there's rookie Tyler Seguin who didn't play until the Tampa series, but put up six points (3-3) in two games, putting his GFON/60 at a ridiculous 6.53. Conversely he has the highest GAON/60 at 4.08. In game seven Seguin actually had more time on the ice than Horton. Eddie Olczyk pondered if Julien would move Seguin up to the second line (at Recchi's expense) depending on how the finals goes.

Am I the only one who thinks paella when he hears Paille? Paille has morphed into a pure PK specialist: averaging near two minutes on the kill, he hasn't been on the ice for a ES goal since game four of the first round. He averages less than seven minutes per game, the fewest minutes amongst Boston skaters who have played in all 18 playoff games. Just edging him out with one more minute per game is Greg Campbell who lives in the defensive zone (at 33.3%, he's eclipsed by only Lapierre and Oreskovich on Vancouver's end). Part of the Horton trade package, Campbell gets the most PK time of their forwards (2.12) and - ignoring Seguin - has the team's worst GAON/60 at 2.98. The fourth line is rounded out with Rich Peverley who can play up and down the line-up but has been rooted into fourth line/PK duties. Acquired in February from Atlanta for Blake Wheeler and Mark Stuart, Peverley had over 40 points in the regular season and eight points (2-6) in the playoffs, certainly not bad for someone with limited minutes. Peverley has decent wheels and is also respectable from the circle (51.9%).

Seabrook/Keith, Weber/Suter, Boyle/Murray…it's only natural the Sedins cap it off by battling the tallest guy to every play in the league and captain of the Bruins (preceded by Joe Thornton, so let's keep that odd demon-slaying narrative going). Chara receives the most PK time for defensemen and second most PP time; the latter may help explain how he leads the team with 54 shots. Chara also leads the blueline with 40 hits and, in a rumored boost to Boston's weak PP, may end up screening Luongo from time to time. Chara's big minutes are only surpassed by Seidenberg: at 21.78 he plays the most ES minutes and second most on the PK. Seidenberg has quietly developed into their key shutdown D man, clocking in with 39 hits, 55 shot blocks (eight in game seven against Tampa) and has been tasked with neutralizing the best from Montreal, Philadelphia and Tampa. No one had more shifts against Tampa than Seidenberg and his responsible play has allowed Chara to roam and jump up offensively.

Ference was part of the Flames' Cup run in 2003-04, so knocking the Lightning out had to feel good from that perspective. When he's not flicking off Montreal or getting kissed by Steve Downie, he's eating the third most minutes at ES (17:59) and has 32 blocks, second best on the back end. He has great speed and good hands; it was Ference who started the rush with an outlet pass that lead to Horton's game seven winner against Tampa. Boychuk - maybe better known for being on the receiving end of that Downie hit and then firing a puck that rearranged Stamkos' face in game seven - has a good shot that's produced six points (3-3) including one game winner. His 2.13 GAON/60 is second highest on the blueline and his 37 hits trails only the top pairing and Lucic. Collectively their Corsi is pretty awful, so if I'm Vigneault this is definitely the pairing I prefer to see the Sedins against instead of Chara/Seidenberg. In addition how Ference and Boychuk handle the Kesler line straight up could be a deciding point in the series.

…and you thought Ballard had it tough? When Boston tossed away their first two picks in 2011 along with prospect Joe Colborne in exchange for Kaberle, they assumed they were at least getting a boost to their second pairing. Instead Kaberle only passed 20 minutes TOI in the first round and overall has averaged slightly over 12 minutes a game on the third pairing. Just like Ballard there's been whispers of outright benching the former Maple Leaf. Nevertheless, Kaberle is their big point player on the man advantage, leading the team with 3.72 PP TOI. Kaberle has yet to score, but has eight postseason helpers, five of which came against Tampa. To keep Kaberle honest, McQuiad plays the quiet, stay-at-home type game. At 6'5'' he's bigger than Andrew Alberts and uses the body effectively, tied with Boychuk with 20 hits in addition to 20 shot blocks.

You don't get this far without strong goaltending and the likely Vezina winner has been exactly that. Thomas has played all18 playoff games, going 12-6 with two shutouts (both against Tampa), a 2.29 GAA (exact same as Luongo) and a .929 SV% (Luongo has .922%). Savvy Boston fans will be quick to tell you Thomas has only allowed one goal in three career games against Vancouver and many pundits are obviously pointing to both goalies as to where this series will be won. Thanks to the second round and Pekka Rinne, the Canucks are already accustomed to solving a terrific netminder. McIntyre hinted at it in the Province: Thomas' unique style is both a strength and weakness. If crashing the net doesn't work, then just as they did with Rinne the Canucks need to keep him moving, guessing and hopefully over-committing.