It's Like So Far It's Been All Chain And No Ball: Canucks & Predators - Game III

Share All sharing options for: It's Like So Far It's Been All Chain And No Ball: Canucks & Predators - Game III 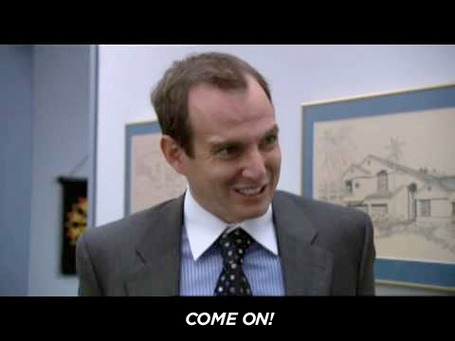 Minneapolis of the South: On the Forecheck

Did you know? They're finally putting the Prohibition behind them? Slow clap...

Strange times are afoot. Our beloved smug bastards were 41-0-0 during the regular season whenever they held a two-goal lead (please do read that again, I'll wait...**looks outside, watches a bird land on the window sill, bird looks at man, both contemplate their place in the organic pecking order, bird flies away sensing his lot in life beats being chained to a computer 24/7**...ah, you're done?). Of course the regular season has as much value as the core theme of a Taylor Swift song and now, here we are: without having a two-goal lead since game two against the Hawks over half a month ago. Going one step further: no center has scored yet in nine post season games.

So the gameplan seems simple: either start scoring, force the Preds back on their heels and open up the ice a bit or we'll get a summer highlight reel of a bunch of thunderstruck gentlemen grimacing as the glance up at the jumbotron.

Vigneault's line shuffles is a fantastic start if, for no other reason, Sammy is taking a back seat to players with two healthy, functional arms. Edler/Juice on the first PP unit is a sight for sore eyes, assuming the refs pull their whistles out. The Sedins know they need a strong game and Kesler alone has got to be a ticking time bomb. Can't argue with playing the Hodgson card either; Oreo's size is lost in this series and the trial by fire couldn't hurt the kid. He may even take a page from the Ben Smith playbook and surprise the hell out of us. Vancouver may get another cannon back if Salo can shake his jimmy legs and give it go, but it sounds doubtful. If not that leaves the Rome/Alberts/Ballard mess which, honestly, the longer you look at it the more creative the cursewords become. Just accept AV wants to see you suffer cardiac arrest.

Forget the double OT and whatever party favors they hand out to raise the decibels, this series starts now.

Michael: "Well, I'm just different than you, Gob. You know, I'm not going to, you know, siphon gas out of some girl's car like you used to in high school just so you can show up and say, 'Car troubles?'

GOB: "It's called 'taking advantage.' It's what gets you ahead in life."

Go earn this sleeping dragon. Lunch pail the hell out the next sixty minutes of your life. Destiny is knocking, don't keep her waiting.