Share All sharing options for: Tuesday Playoff Coffee- Lay Down Your Soul To The Gods Rock n Roll

Much like the desired effect from the precious bean my columns pay tribute to, this series is in need of a major wakeup call.  There's no panic here, a split in a couple one goal games is hardly a reason to freak out.  What needs to happen is for the Canucks to try and pull a page out of the Ducks book and get this team out of their comfort zone.  What happens when you do that?  Try Pekka Rinne surrendering 11 goals in the two losses to Anaheim.  So while some so-called journalists try to tell you that there's a goaltending controversy here, the fact of the matter is it couldn't be further from the truth.  Rinne and Roberto Luongo are as evenly matched as you can get.  What needs to happen is for the Canucks superior firepower to expose them the way players like Selanne, Perry, Ryan and Getzlaf did.

History for the Preds tonight as they host a 2nd round game for the first time in their existence.  It would not be a shock if the Canucks spoil the party however, as the Canucks have strolled out of Nashville with a victory in 7 of their last 10 visits.  It's not like they can't break them down, they've done it before.  It's just going to require a little bit of patience, and if the Canucks can bring a high-energy attack early on, hitting everything in sight and dictate the pace of the game that will certainly work in their favour.

Getting goals (yes, plural) will be good, especially if they come from someone other than Alexandre Burrows.  There are a number of players getting numerous chances, and Rinne is like any other goalie, eventually the shots will go in if you're persistent, it's just a matter of getting to them and getting rebounds if they happen.  A bigger net presence is required tonight, and getting the PP back on track would be a tremendous boost.

I guess I need to go get in the Govt. Bread Line and get my ration from Dear Leader...

Boston sure seems like they want to make amends for that historic collapse against the Philadelphia Flyers, don't they?  The Bruins got a goal from David Kreici 6 minutes into OT for the win, overshadowing a fantastic game by the Flyers' James Van Riemsdyk, who scored twice.  The Bruins now head home with a 2-0 series lead, and the Flyers are going to once again have to try and figure out a way to get back into this series... The Victoria Salmon Kings lost to the Alaska Aces last night, and with that have played their last game in Victoria.  I have mentioned in the past I think that losing pro hockey in Victoria is a bad thing, and while getting a WHL team will soften the blow, it's just another disappointment living in this city. 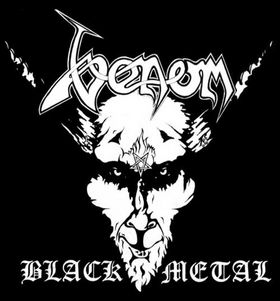 They were part of the New Wave Of British Heavy Metal alongside bands like Iron Maiden, Saxon, Raven and Def Leppard (yes, before they got lame), but they were decidedly different.  Their lyrical and visual approach was much darker.  They were evil personified, sort of.  And they inspired a whole sub-genre of metal, with this album in particular.  And while they may have inspired some of the most evil of metal bands, for the most part, they were more cartoon-y, and certainly didn't take any of this stuff very seriously.  As a high school kid just getting into metal, they were scary as hell itself to me, and it took me a while to muster the courage to listen to them.  I've been a fan ever since.  An interesting story from the recording of this album: The band thought it would be cool to have the sounds of dirt being shoveled into a grave to start the song 'Buried Alive', so when the producer and engineer weren't around they put a mic in a stairwell and recorded themselves burying the mic with soil, which didn't go over so well with the studio owners.