Share All sharing options for: Sunday Playoff Coffee- Kool-Aid anyone? 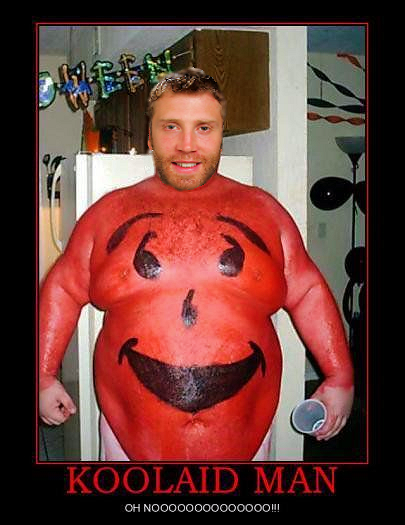 Well that's not much of a turn-around, is it?  The real impact from (looks for his name) Kid Rock?  Really?  Is it 1998?  What the hell..?  Anyways, the gap in the first two games led to Game 4 being scheduled for noon PDT.  But hey, it's 3pm Eastern, right?  Better to have the game shown at a reasonable time in areas of the continent that couldn't give a squirt about either team than risk running into prime time and preventing Donald Trump from getting beaten in his time slot again.  I suppose we should actually be happy that NBC is televising this game.  Imagine all the minds in the US that are gonna be blown when they find out that awesome place in Canada that hosted the Olympics has a hockey team.  But I digress.  Let's focus on the game ahead.  For all of the back-patting that went on for the Sharks, you'd think Game 3 was a blowout.  The reality is, the Sharks should really be concerned after the Canucks finally started getting their penalty kill back on track after that ridiculous first period that lost the game for them.  That game had more to do with the Canucks riding a different horse than the one that got them there, than anything the Sharks brought.  Time to go back to the speedier lineup.  Time to be the ones using our speed to draw penalties instead of giving the referees a chance to call it against them.  Time to get all the people to stop drinking the Sharks' Kool Aid and show them there's a reason that this team has lost so many Conference final games.

Obviously losing Aaron Rome and especially Christian Ehrhoff is a blow to the Canucks, and from the moment Aaron Rome was helped off the ice the speculation began: does Keith Ballard get back into the lineup?  I would imagine we will see Andrew Alberts draw in, but does Alain Vigneault go with Ballard, who has found himself in and out of the lineup so often that you have to wonder if he even knows how to get to the dressing room, or does he throw rookie Chris Tanev in?  It seems to me that you'd likely want experience in this situation, but as we Canucks fans know, trying to figure out AV is next to impossible.

The other thing the Canucks need to do is get Cody Hodgson and Jeff Tambellini back in the lineup.  Tanner Glass and Alexandre Bolduc brought absolutely zip to the table, whereas CoHo and Tambo were noticeable in their 2 appearances.  Their speed and hockey smarts are what we need here, not size for potential skirmishes.   The much slower Sharks defence were under pressure for most of the first two games, and it's vital the Canucks get back to trying to exploit this in order to head back to Vancouver with a 3-1 series lead.

As mentioned, discipline has to be the key for Game 4.  Speaking to NHL.com, Kevin Bieksa said "Definitely have to be more disciplined.  I'm not saying we were undisciplined in the sense that we were punching guys in the face.  But when you put your stick somewhere it doesn't belong, it's a 50/50 call.  The referees want to call it tight, that's what going to happen.  It's up to us that that doesn't happen".  And that's the truth, the majority of these calls were the Canucks doing little things that gave the officials a chance to call the penalties.  Smart play and utilizing their speed to get the Sharks chasing will reverse this trend.  The PK did get better as the game wore on, but it has to get back to regular season levels.  They need to simplify things, and most importantly, guys like Ryan Kesler and Alexandre Burrows need to insure they're not in the box and actually out there killing these off.

As is the way in this part of the world, any loss is pinned on Roberto Luongo.  It's getting a little pathetic, really.  Even goals that you can say he should have stopped aren't factoring in the fact that being on the PK when these goals are happening, and inexplicable defensive gaffes are equally to blame.  I am sure however that a quick Google search will find someone blaming Luongo for the Rapture not arriving yesterday.  We've talked about it time and time again, and I am gonna go out on a limb here and say even if the Canucks win the Cup, Roberto still won't be shown the respect he deserves.

It was on this day in 1970 that the NHL awarded a franchise to Vancouver.  Let today be a day where they show that things are different, and this team will not be stopped on it's march to bring the Cup back to Canada, and home to Vancouver for the first time in almost 100 years.  It's time.

After the first period, the Tampa Bay Lightning looked like they were in trouble.  They were in a situation similar to the Canucks Friday, down 3-0 after the first.  Cue Simon Gagne.  The guy who as a Philadelphia Flyer struck the death blow in their comeback from 3-0 down to win the series had the game winning goal and 2 assists, and Teddy Purcell scored twice to lead the Lightning to a 5-3 win to knot the series at 2 games a piece heading back to Boston for game 5.  Dwayne Roloson was pulled after the 1st period for Mike Smith, and he shut the door for the Bolts, giving them a chance to come back.  One ridiculous incident last night:  Nathan Horton nailed Steve Downey along the glass.  Downie was nearly knocked unconscious from the hit, and because his head jerked back, referee Tim Peel gave Downie a two minute diving penalty.  Downie tried to skate to the bench, obviously dazed while one of the linesmen was trying to physically stop him from getting help.  Downie's reputation may have gotten that penalty for him, but in a time where there's such a focus on head shots, it was shocking to see the on ice officials not recognize what was clear to anyone watching the game.  By the way, that is the 2nd time in 16 playoff games the Bruins blew a 3-0 lead to lose a game.  The last one was that game 7 loss to the Flyers.

The 4th and final album of the band credited with the creation of the 'Gothenburg sound', has left a massive impact on the death metal scene, incorporating melody with brutality and inspiring a generation of bands around the world.  Led by vocalist Tomas Lindberg, Slaughter Of the Soul is a non-stop riff-fest that really showcased the band at their finest moment.  Most of the band went on to form The Haunted, while Tomas Lindberg went on to do vocals for (ahem) Ceremonial Oath, Skitsystem, The Great Deciever, Lock Up, The Crown, Disfear, and Nightrage, in addition to a large number of guest appearances.  True story: If we ever got around to recording, my band planned on calling the album 'Featuring Tomas Lindberg' in a nod to his massive output of appearances post-ATG, and as a cheesy way to dupe people into buying it...