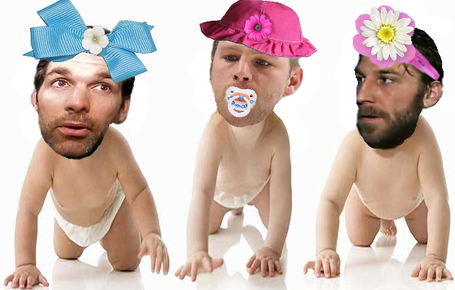 So here we are, friends.  2 games in, 2 games won.  And what a study in contrasts game 2 was.  The Canucks were as advertised this season: offensively aggressive, the defence not giving their opponents much of a sniff, and disciplined.  The Sharks?  They crumbled into an undisciplined mess, and looked miles away from the form that lead them to 2nd place in the West this season.  They likely couldn't get home soon enough.  The bad news, is that they're facing one of the best road teams all season in the Canucks.  This game is huge obviously.  A loss by the Sharks will put them in a hole they're not likely to come out of.  And as good as the Sharks are, can this team overcome a Canucks team that is really beginning to crank it up?

One of the most telling tales of the series to date is how the Canucks have been able to exploit the slower, and less talented Sharks defence.  With Jason Demers out of the lineup, they're even more hard pressed to try and compete with the speedy Canucks offence, especially with the mobility of the defence.  Their game plan has worked well to date, with a lot more room to roam out there than they saw during the Nashville series.  The question is, can the Sharks try and shut down the Sedins, and if they do does that mean taking their eyes off the 2nd and 3rd lines?  The depth of the Canucks has been the difference thus far.

That's not to say the Sharks can't win this game.  They're a great home ice team, and they battled back in game 7 to defeat the Red Wings.  They will need a lot of things to go right, however, and one of those could be the toughest challenge of all: trying to get the composed Canucks off their game.  The only real chink in the armour of the Canucks thus far has been the PK, which is a little surprising considering how good it's been in the playoffs thus far, especially against Nashville.  San Jose's PP has been lethal, and it's been one of the few things that's gone right for them.

They are also going to need a better effort from the players that got them where they are.  That means players like Joe Thornton, Dany Heatley, Joe Pavelski and Ryane Clowe have to step up their game.  Patrick Marleau gets a pass in my eyes because he's contributed on the score sheet and had the stones to challenge Kevin Bieksa to fight.  Their defence is going to need to play some defence and not leave Antti Niemi hung out to dry.  And Niemi?  Well he has to be better.  He sits 2nd last in GAA of playoff goalies with 3.30, and a save % of .900.  If the Canucks continue their strong, focused play Niemi might be called on to steal a game.  But without the defence in front of him like he enjoyed in Chicago, can he?  There are no Seabrooks and Keiths on their back end.

The Canucks are going to have rely on some effective shift control and line changes tonight, in order to try and keep the line matchups the way they want.  Trying to keep the Thornton line from going up against the 4th line would be a good thing.  Seeing some flashes of 2nd round Ryan Kesler would be great too.  Chris Higgins and Mason Raymond have looked dangerous thus far, and if the Canucks have all 3 lines firing in this game, it will make it that much harder for the Sharks to play their style of game.   The mobility of the Canucks defence, and the ability of Canucks forwards to get in behind the Sharks D and win puck battles has been a huge reason they're up 2-0.

One of the things that was supposed to be a reason for the Canucks to be concerned was the Sharks size.  They were supposed to be mopping the floor with the Canucks physically.  The exact opposite has happened though, as the Canucks have outhit their opponents in both games.  And that brings us to the Eager factor.  Will the Sharks be able to play physical but keep their emotions in check?  They are a team with a historic short fuse, and after Wednesday, the last thing they want to do is give the Canucks more opportunities on the power play.  And Ben Eager, who has seemingly been given a green light to go after the Canucks by coach Todd McLellan,   is he  capable of playing a physical, yet controlled and intelligent game?  History suggests that's not possible, and no one knows this better than the Canucks.  It's not a matter of if this neanderthal will lose his cool, but when.  And hopefully it doesn't have a catastrophic result.  Eager will be headhunting tonight.  Bank on it.

All in all, if the Canucks play their game, they can beat the Sharks.  They match them evenly offensively, and their bottom 6 is better.  Their defence is superior.  And thus far, Roberto Luongo has been the better goaltender.  It should be a long series.  If the Sharks can't correct the sloppy habits they seem to have developed it could be a short one indeed.  And paramount for San Jose is a bigger focus on playing hockey than the ridiculous whining to the press might be a good place to start.  Dan Boyle, Ryane Clowe and Ben Eager have been crying and whimpering to anyone within earshot about the Canucks and how it's us and not them.  This has been going on for the length of the playoffs and it's never been more hypocritical than the garbage spewing from their mouths.  Maybe if these 3 actually played some hockey instead of worrying about supposed dives, spot picking and the officiating, they might not be down 2-0.  It's pretty funny when you think back to our old pal Welly the Weasel and his comments about the differences between the Canucks and the Sharks.  You know, when he said "I just think Vancouver has a few more lessons to learn, and I'm glad I'm in San Jose," ... "I just feel they're more mature because they've lost a few more times. They're not so scared of losing".  Sorry dude, but it seems like the team with the maturity problem is the one you're on.  Enjoy the 4th line, jackass.

Talk about schizophrenic.  The Boston Bruins and Tampa Bay Lightning have played 3 completely different games so far, from the Lightning stomping Boston in Game 1, to the wild shooting gallery that was game 2.  And now, a prototypical Tim Thomas shutout as he blanked the high powered Tampa offence to allow the Bruins to take a 2-1 series lead last night.  David Krejci and Andrew Ferrence scored for the Bruins, and look to put a stranglehold on the series and make their first appearance in the Stanley Cup finals since 1990.

When it comes to bands that just scream metal, few can match Motorhead.  Just look at Lemmy.  His grizzled face is metal, and he and the band show no signs of letting up.  He's 65 years old and he rocks and parties harder than others half his age.  And if you had to pick one song that signifies what they're all about, it's Ace Of Spades.  Everyone's rocked out to this one at a bar or party at least once in their lifetime.  And this album, released in 1980 remains one of their best selling, and was a huge influence on the thrash scene in years to follow.