Canucks Drown Sharks At The Rog And Take 2-0 Series Lead: Thanks Ben Eager

Share All sharing options for: Canucks Drown Sharks At The Rog And Take 2-0 Series Lead: Thanks Ben Eager 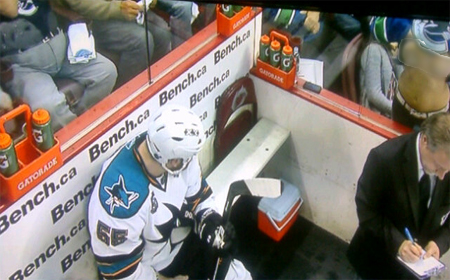 First things first. The Sharks are 3 for 4 on the power play in this series and the Canucks will need to remedy that quick. Loose play on Logan Couture's PP goal as he blew by a Canucks D on the rush for the 1-0 goal. And then just a bad goal let in by Roberto Luongo on Patrick Marleau's stuff-in. I've seen worse. Lou was trying to cover a loose puck but Marleau got his stick on it. The rest?

Most notably was Ben Eager, who was screaming at the Canucks' bench from his own side of the glass. Niclas Wallin was seen putting his arm around Eager soon after trying to calm him down. Eager then proceeded to jump on the ice about a minute and a half later and board Daniel Sedin. Watch the clip:

Well geez, from that replay I think it's pretty obvious that it was intentional boarding. Eager got 2 minutes for that. 2 minutes!! Maybe if Dank doesn't jump right back up afterwards Eager gets ejected. Screw it. Dank had a bloody nose and didn't give the ape the gratitude. The Canucks failed to capitalize on the ensuing power play to start the 3rd but hey: about 7:00 into the final frame Eager takes an idiotic tripping penalty and this time Chris Higgins buries one to make it 4-2. Then the wheels fell off for San Jose. 4 minutes later the Sharks take a too many men penalty and Daniel Sedin scores his second power play goal of the night. 5-2.

Back to Eager Beaver. With the score 7-2 Canucks the moron scores a goal to make it 7-3. What does he do? He stands over Roberto Luongo and chirps at him relentlessly. Ian White and Joe Pavelski try to pull him away but he persists. What is this? An out-of-control buffoon who isn't being a team player. Why did Todd McLellan play Eager so much in the 3rd period? He rewarded a jackass for costing his team the game. I suppose he was also trying to get Eager to get under the Canucks' skin. I don't think he succeeded. Nice work, Todd.