Share All sharing options for: Wednesday Playoff Coffee- Stop being such gracious hosts... 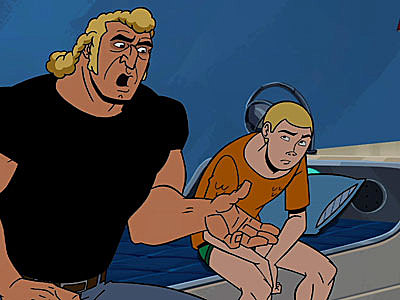 Brock: After the twist, you'll feel a snap. Then the body goes ragdoll on ya.
Hank: And that will knock him out...even more?
Brock: That'll kill him.
Hank: Do I have to?
Brock: Alright fine, crybaby. Just tie him up and, maybe I guess gag him. But at the first sign of trouble I want you to at least break both his knees.

Everyone got their 'Canucks aren't Canada's team/ they're a bunch of divers/ the Sedins are useless in the playoffs/ Roberto Luongo is horrible' outta their system yet?  Good.  Time to focus on Game 2.  Say what you will about the officiating Sunday, the simple fact still holds up: the best team won.  You can try and justify the loss however you want, claiming the Canucks got help, but if your team is committing penalties and you get called for them, it's not about the referees helping the Canucks.  You're helping them.  The spin after game 1 was so predictable you'd been given scripts that were used in the first two rounds.  The Sharks are going to bring a lot more than they did in Game 1, the question is, can they keep their aggression controlled, or like in past meetings with the Canucks will they see their frustration boil over into more penalties.  With the way the Canucks power play has been clicking of late, that's definitely playing with fire.

For the most part, the Canucks plan of attack went the way it was supposed to in Game 1.  They got into it physically against the team that was supposed to dominate them in that aspect.  They had their slower defencemen scrambling all night as they cycled.  And lines 1 through 3 had chances, while the defence limited the Sharks to a lot of shots from the outside.  It wasn't perfect, but it was a damn fine game after that layoff.   The Canucks will need to crank up their effort tonight against the Sharks and prove to be a less hospitable host than they were to Nashville.

We will find out later today if Alain Vigneault will put Jeff Tambellini back in the lineup in place of Tanner Glass on the 4th line.  Tambellini had an amazing play in Game 6 against the Predators as he came from a zone and a half back to catch the Preds' Martin Erat and eliminate Erat's breakaway chance by hitting him and separating him from the puck.  One play, but it was a massive one in the kid's first playoff game.  It's another sign of how much this team has grown from previous incarnations.  Instead of players looking to things all themselves and acting selfishly, here was a guy who made the most of his shot in the lineup.  You need these kinds of efforts in a successful playoff run just as much as you do the the Ryan Keslers and Kevin Bieksas.

The other thing on the minds of Canucks fans this morning is the birthday boy, Manny Malhotra.    Malhotra went from skating in sweats with the team because 'he wanted to have fun' to yesterday's practice in full equipment.  The coach was quick to shoot down any comeback rumours, but let's face it: this is the playoffs, and you only know the truth after the smoke clears.  Malhotra's recovery from an eye injury that could have ended his career has been remarkable, and the team keeping him in the room during the playoffs speaks volume of his value to this club off the ice.  The organization is continuing to say that he won't be returning until next season, but my gut tells me that unless that rapture thing happens Saturday, we will see Malhotra on the ice should the Canucks make the finals.

How crazy would it have been if the performance of Tyler Seguin would have been overshadowed by a Tampa Bay comeback victory last night?  Seguin had 2 goals and 2 assists in a crazy 2nd period last night that saw Dwayne Roloson chased from the Lightning's net for the 3rd period.  Mike Smith held the fort, and the Lightning got a couple goals on Tim Thomas but he and the Bruins hung on for the 6-5 win.  Is there a more schizophrenic goalie out there than Tim Thomas?  The saves he made were amazing.  The goals he let in were embarrassing.  Either way, despite 6 goals scored, the Bruins are a little lucky to be heading down to Tampa with the series tied.  They're still in this because of a kid who has 2 playoff games to his credit.  By the way, Seguin was the first teenager to record 4 points in a playoff game since Trevor Linden notched 4 against the Calgary Flames in 1989.

Released in North America in 1981, the first solo release from the Black Sabbath front man introduced the world to the genius of Randy Rhoads.  Rhoads would record one more album with Osbourne before his untimely demise in 1982.  The album was a massive hit, hitting #21 on Billboard, doing so without a top 40 single.  It's gone on to sell more than 6 million copies world wide.  Sony Music is rereleasing the album in a special box set May 31st, with a ton of extras that should be worth picking up.  The album is also notorious for the song 'Suicide Solution'.  The parents of a 19 year old fan who shot himself blamed Osbourne and CBS Records, suing them.  The case was dismissed, saying the First Amendment protected Osbourne's right to free expression.