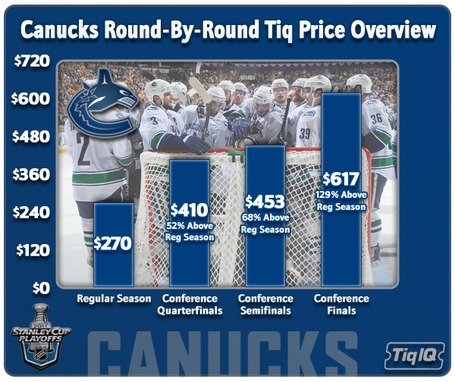 This post is brought to you by TiqIQ, who provide a ticket aggregating service for Nucks Misconduct. To look at ticket prices for the upcoming game and purchase the best possible tickets for your money, head on over here.

If the image above compelled a noise similar to what Joe Pavelski made when drilled by Chris Higgins, you are forgiven. At $617 the Canucks have the highest ticket prices of the four remaining teams.

However if you view the conference final prices in comparison with the regular season rates, Vancouver has the smaller increase percentage-wise (San Jose has the biggest jump: from $80 in the regular season to $498 now, an increase of 523%). The kicker is Tampa Bay - the only team remaining with a Cup that doesn't involve turning the clock back to when man first walked upright - have conference final tickets that cost roughly 2/3rd's of ours.

None of this is shocking of course. Vancouver tickets have been the biggest thing in town for several seasons now. That's the price you pay for success and playing in an affluent market starved for hockey's greatest trophy. Ahem.

In related news: The Preakness is this Saturday and there's some juicy odds before tomorrow's post selection. Nudge nudge wink wink.

Update: I should clarify that the graph above is an estimate of the overall price trends. If you actually jump into TiqIQ's application, you'll see plenty of tickets remaining, many in the low $200 range from eBay and Stubhub.