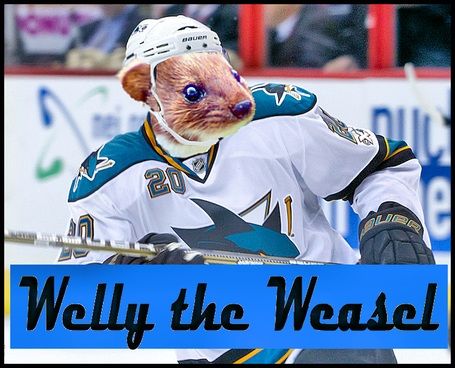 A note for Sharks fans:  The Morning Coffee is a game day thread that provides additional commentary on the evening's action as well as a look back at what happened the previous night.  Oh, and it gets a little loud.  Some of you Bay Area people might appreciate it.

Not just an agonizing wait since they sealed the deal with Nashville Monday evening.  An entire generation has passed since the Canucks dropped the pucks for the beginning of their Round 3 series against the Toronto Maple Leafs, and in that time, the Canuck Nation has grown exponentially.  Our opponent in this series also know the sting of unfulfilled expectations.  These teams wear labels, thrown around their necks by media, other teams fans and even some of our own.  Unfortunately for the naysayers, something is going to change this time.  One of these teams is going to change the narrative.

In many people's eyes, neither of these teams were supposed to be here.  They were both to succumb to teams that finished beneath them in the standings.  Individual players were supposed to single-handedly lose a series.  Instead, players previously thought of as 'chokers' have risen to the occasion.  Ways to disarm these teams proved fruitless, as depth and team play has won out in both instances.  And with each of their go-to's as far as reasons why we'd fail gets left in the dust, they get more irrational.  'Professional' journalists throwing out any hint of impartiality, blatantly attacking these teams and their players.  The whole 'Not Canada's Team' garbage, where some of these idiots have actually called players Un-Canadian because of the province they were born in.  I've said all along: cheer for us against us, it doesn't matter to me.  But the hateful, deceitful bile being spewed needs to stop.  And yes, that goes for you  too Jeremy Roenick, you ridiculous son of a bitch.

No, as much as the haters like to think otherwise, this is the series that should be.  The top 2 seeds in the West, fighting for the right to battle for their 1st Stanley Cup.  And much like the regular season, in a way it doesn't matter how they got here.  Both of these teams found a way to battle through adversity and injury, even past demons.  One of these teams is speeding towards destiny.  It's gonna be a hard fought, drawn out, slobberknocker of a series.

Some are saying they don't feel the animosity yet, as these teams have yet to meet in the playoffs.  I say look back at the regular season meetings over the years.  They've been wars.  Add in the propensity for less than legal hits by a number of your players in the past, mix in one of the league's biggest douchebags in the form of mouth-breathing neanderthal Ben Eager and the bitter little man himself, Kyle 'Welly The Weasel' Wellwood.  Add the desire to be the team who completes their exorcism of the Hawks with a win over Antti Niemi and you have all the makings of an explosive series.

And yes, Kyle Wellwood.  It was quite frankly a shock to hear the comments that came from his mouth.  Mainly because they were clear and concise, not being muffled by a turkey leg.  Kyle's decided that he knows why the Canucks faltered the last couple seasons.  I would say you not getting a contract renewal was a pretty clear indication of how the Canucks' management and coaching staff feel on that matter.  It's funny how players whose inability to do their jobs in a Canucks uniform lashed out at them, and as Ryan Johnson and Shane O'Brien were shown, they were dead wrong.  Kyle Wellwood will join this illustrious bunch.

It's the Canucks 40th anniversary.  And with apologies to our friends down in California, you're just going to have to suffer a little bit more.  We've waited a generation for another shot at glory.   You're not going to take this from us.  We, the members of Canuck Nation deserve this.

Everything is better with bacon.  It's a scientific fact.

First, I want to touch on the shocking death of Derek Boogaard.  The Canucks have a special connection with the Boogeyman, having had him torment some of our ranks for a few years as a member of the Minnesota Wild, to the point he became for many the most hated member of that team in our fans' eyes.  As far as enforcers go, that's likely the biggest compliment you can pay them.  While there were a couple incidents where he crossed the line, for the most part Boogaard followed the code, and did his job well for the Wild and up until the injury he suffered in December, for the Rangers.  It will be a few days before we find out just what happened, and the news that he was in the leagues Behavioral & Substance Abuse program casts an even darker light on the situation, if that were possible.  They may be rivals, but our thoughts are with our friends over at Hockey Wilderness, Blueshirt Banter, and Wild and Rangers fans, as well as his friends and families... Quite a stunner last night as the Tampa Bay Lightning rolled over the Boston Bruins in Game 1 of the Eastern Conference finals.  The Lightning silenced the TD Garden crowd with a jaw-dropping 3 goals in 1:25 on Tim Thomas, getting goals from foot soldiers Teddy Purcell, Brett Clark and the unsung hero of the playoffs Sean Bergenheim with his 8th goal of the post season.  The Lightning were as prepared and focused as the Bruins weren't, and Boston better figure out a way to look past this, or they are going to be in trouble.  The nonsense at the end of the game was so stereotypically ridiculous, wasn't it?  Don't get me wrong, Milan Lucic is a talented hockey player.  But his apparent love for sucker punching people is going to cost him and the Bruins now and down the road.  He needs to knock off the garbage, he's a tough kid, and can chuck the knuckles with the best of them, but sucker punching someone doesn't make you tough.  It makes you a pathetic chicken shit.  But seeing as how this is not his first time doing this, we can only assume that this is Bruins hockey.  I am sure Doctor Recchi thinks Hedman should have been called for a dive.  Oh, and Nathan Horton's a douchebag of the future, isn't he?  The Bruins are gonna get devoured if they can't be disciplined...  Finally, a thought on Team Canada.  I totally agree with Bob Nicholson when he vented about players not answering the call to join Team Canada.  Good on those who did, they played well and did the nation proud.  But I am gonna come right out and say it: Jonathan Toews, Brent Seabrook and Duncan Keith should be ashamed of themselves for not going over to Slovakia and represent Team Canada.  Just another example of an organization that has zero class...

Having just knocked the metal world on it's ass a year earlier with their "Kill 'Em All" debut, the band quickly released Ride The Lightning in July of 1984, and it caught the eye of Elektra  Records, who snapped up the band from Megaforce Records and re-released the album that November.  A huge leap forward for the band in terms of musical ability and maturity, this album contains some utterly legendary tracks, with hardly a weak spot to be found.   The band toured incessantly for this album, and it's impact is still felt in the legions of thrash bands world wide.

and a wicked live version from Cliff 'Em All: For Whom The Bell Tolls live at Day On The Green in 1985.  RIP Cliff.