A look at Ryan Kesler's series against the Predators

Share All sharing options for: A look at Ryan Kesler's series against the Predators

Ryan Kesler is coming off one of the more impressive playoff series in recent memory. By now, we all know that Kesler was in on 11 of the Vancouver Canucks' 14 goals against the Nashville Predators, an unprecedented ratio in franchise history. Nashville coach Barry Trotz said that Kesler had "six of the most incredible games you will ever see," and that Kesler "played to a level that few people can reach" -  (Barry Trotz also appears to coach the Canucks now, according to CBS Sports).

I don't necessarily want to bore the readers of this blog with talk about percentages and how the percentages balanced out for Kesler over the course of the series and how Kesler had an unsustainably high shooting percentage in Games Three, Four and Five. Instead I'll point to an amusing e-mail conversation I had with a friend I argue about hockey and football with often. He is a Flames fan, which means he has a lot of time to watch other teams in the playoffs and deliver cutting analysis.

The first e-mail I got pertaining to Ryan Kesler came on April 27, the day after the Canucks won some overtime game against Chicago:

Here is a fact. Kessler has averaged nearly 31 goals a season, the last
3. He has 3 goals in 30 play-off games. Yes he did play well, but needs
to be counted on as a offensive player. He had a wide open net and blew
it and it would have put the Hawks away. He didn't and the Hawks came
back and tied it. He needs to bury opportunities like that, or it will
cost them down the road. The only way Vancouver has any chance to win a
cup is that he produces offensively. He is a key player and needs to
accept his role as " more than a checker " . He needs to take the
pressure off the Sedin line, and if he does, they will be better.

Now Doug Gilmour in 89 had a lousy first round, and was great later. If
he doesn't contribute offensively later, the Canadiens would have
probably beat the Flames. Kessler is to produce more than 1 goal every
10 games when he produce 3 out of 8 in the regular season.

This sort of upset me. Ryan Kesler had strong Corsi and Fenwick numbers (indicating possession and scoring chance differential) through the first round and kept Jonathan Toews off the scoreboard at both even strength and the powerplay. I called Ryan Kesler my second star of the series over at The Hockey Writers even though he managed just four assists. He was getting shots from good areas, they just weren't going in, which is generally more indicative of luck than performance.

My reply was as thus:

Kes had a 16% shooting percentage this season, quite elevated from his
career average, so some regression was to be expected. With 23 shots in
the series, the luck element dictated that he should have had at least
two. Maybe even three, to have a reasonable individual shooting
percentage. In effect, he played well enough in that sense to have 5 or
6 points in a 7-game series, which is a very good points per game
average for somebody who started 42.5% of his shifts in the defensive
zone. His advanced numbers are actually very similar to Michael
Cammalleri's, but nobody is complaining about the way that guy played in
the first round.


(At that time, the Canadiens were on the heels of a Game Six victory and were headed into a Game Seven that night, that they would lose by a single goal)

All I am saying he is a great player, will need to contribute for them
to win another 12 games. If he performs the same as round 1, Van will
get beat for sure. He will have to take his turn chipping in key goals.
Cammelleri scored two big goals ( one was taken away in a bad call ),
and it was needed big time. Kessler needs to do that as well.

Essentially, he took the "Kessler [sic] needs to step it up" HockeyCentral and Sportscentre, lazy analysis, narrative-driven approach while I took the "low percentages" approach.

After the series, I got this:

Elliot Friedman shared a story comparing Kesler to Cam Neely. In 1990 ,
Neely wasn't scoring . Sinden went and talked to him about. Neely
pointed out he was hitting, and playing well, no puck luck around the
net. Sinden told him he is not paying him to "just play well", he is
paying him to score. Just solidifying my point about Kesler. For Van to
win the cup, he needs to score, especially since the twins are
heartless. He is the "true ' captain of the team.

At the very least, the series convinced my friend that Kesler only has one 'S' in his name.

I countered by saying that two things happened in the second round:

#1 - To neutralize Shea Weber, Alain Vigneault played the Kesler line in offensive situations. This gave Kesler more scoring chances against weaker defense and allowed the Sedins to eat up clock against Nashville's strongest scoring threat. Say what you want about their minus-whatever statistic, but they held Shea Weber to zero points.

#2 - Kesler had an unsustainably low shooting percentage in the first round, and the inevitable correction was made.

The first notion was a little bit off becuase I hadn't counted the numbers. Indeed, Ryan Kesler did start 12 more faceoffs in the offensive zone in the Nashville series than the Chicago series (despite the smaller number of games) and the offensive-zone differential spiked up from minus-11 to plus-17, but this was more of an effect that the team were playing in more offensive situations, period.

While the brilliant website Behind The Net tracks the percentage of which zone you take a faceoff from, it does not provide a relative value that compares where you did with your teammate. This chart here indicates the percentage of team offensive zone draws between Henrik Sedin and Ryan Kesler in the 13 games played:

You'll notice that Kesler only took more offensive-zone draws than Henrik in Games 4, 6 and 11 (all of them road games). In those games, Kesler had just a single goal in 10 shots taken. One thing we need to consider is that all of these numbers are in even strength situations only, and Kesler, like the rest of the Canucks, took advantage in powerplay situations. Three of his five series goals came with the extra man, and the Canucks powerplay shooting percentage was 26.7% in Games 3-6 of the Nashville series, compared with a 10.8% percentage combined in Round One and Games One and Two of the series against the Preds. 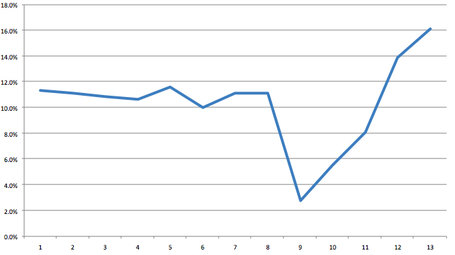 It's almost prophetic that the percentage dipped to such a low 2.8% the game before Kesler started scoring. In a game where percentages can turn around at the toss of a hat (Kesler in Game Three) or an entire season (Tampa Bay, in, what I can only assume to be Round Three) Kesler is now riding a high 10-game average that is higher than his season average. Expect a dip in production, but not performance. Kesler is a plus-Corsi and plus-Fenwick player who can play in both offensive and defensive situations with equal effectiveness.

The last point I want to make is about Barry Trotz, who did everything to stop Ryan Kesler other than pair him up against Shea Weber and Ryan Suter. Using the same principle as faceoffs, I compared the minutes Weber played at even-strength against both Henrik and Kesler: 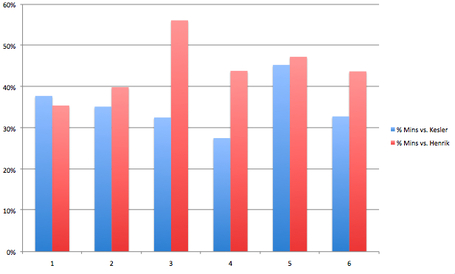 Interestingly, Weber was used more often against Kesler in games in Vancouver, where the Canucks have the last change. Trotz tried to get his top unit against the Sedins when the series was in Nashville (which is where the Preds dropped three games). This could be because Kesler victimized Weber twice in the series. At the very least, Henrik and Daniel ate up minutes against Weber and Ryan Suter and created headaches for Trotz, so while Daniel hasn't been scoring as much as we'd like, we know that they won the possession battle (thanks in part to offensive faceoffs) which kept one of Nashville's top scorers off the sheet and played at a way that will facilitate a production turnaround when the percentages call for it.