Saturday Morning Coffee- Time to get fired up!

Share All sharing options for: Saturday Morning Coffee- Time to get fired up!

A lot of people will tell you that there's nothing to play for in this game, but they couldn't be more wrong.  The Canucks need to limit the Flames to less than 8 goals to win the Jennings Trophy.  Okay, that one's kinda funny.  In all seriousness a fired up Canucks team in front of a few thousand of their displaced fans behind enemy lines, with our top 6 D together for the first time this season should be worth watching.  Also, a result like the one against the Minnesota Wild will be the proverbial head on a stake outside the gates as the playoff start.  Send a message that's loud and clear to the entire league: You can have your "what if's" and theories... the road to the cup goes through Vancouver.  Add in a strong game from Daniel Sedin will help him clinch the Art Ross Trophy and in all likelihood the Hart Trophy as well, and there's still plenty to play for.

It's a testament to either a) how tight the Western Conference has been this season, or the more likely answer b) Gary Bettman's manufactured parity fetish, that the Canucks still don't know who they're going to play come Thursday.  It could be the Chicago Blackhawks.  It could be the Anaheim Ducks.  It could be the Los Angeles Kings.  Hell, it could even be the Dallas Stars.  None of these teams scare me to be honest.  I think that some will give the Canucks a tougher series than others.  Overall, I truly believe this team has what it takes to be there at the end.

How good was Alexander Edler in his first game back?  He was physical, made some smart plays and looked like he was about two weeks into his return, and not game 1.  Getting him back as well as Dan Hamhuis tonight is going to be awesome.  From the top to bottom this is likely the strongest Dcore in the NHL.  Add in Aaron Rome, who will be used as a forward tonight thanks to one last day of cap space issues and the Canucks are set to wrap up this historic 40th anniversary.

This is going to be a crazy day, and a lot of the muddied post-season picture will get cleared up early.  The New York Rangers need to win today to have a shot at the post-season.  They take on the New Jersey Devils in an early game that many will be watching, especially the Carolina Hurricanes.  A Rangers regulation loss would mean they'd only need a point to clinch as they take on the Tampa Bay Lightning.  A  Philadelphia Flyers win today will see them possibly clinch their division, pending the outcome of the Penguins tilt against the Atlanta Thrashers tomorrow.  The Flyers have the New York Islanders today, and will be looking to secure that 2nd spot in the East, which could see them take on either the Buffalo Sabres or Montreal Canadiens.  Speaking of the Habs, they wrap up their regular season with a game against the Toronto Maple Leafs... Still lots to be decided in the West, as the 8th spot is still open.  The Phoenix Coyotes and Nashville Predators are battling for that 4th spot and home ice in the first round.  Should both of them lose, a win by the Anaheim Ducks could see them vault into that 4th spot.  The Ducks are taking on the Los Angeles Kings, who have been struggling after losing leading score Anze Kopitar.  Phoenix takes on the San Jose Sharks, and the Predators take on the St. Louis Blues.  These games set the stage for tomorrow, as the Chicago Blackhawks take on the Detroit Red Wings at the United Center in the early game.  A regulation loss by the Hawks and a win by Dallas against the Minnesota Wild will see Dallas move into that 8th spot. 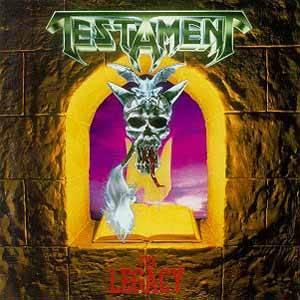 A new feature that I wanted to get kickstarted as we head to the playoffs.  Each Coffee will now come with a classic album, and provide you with a lil metallic kickstart as we head towards game time.  Today we start with the debut album from Bay Area thrashers Testament.  Formerly known as Legacy, this disc became a hit right away thanks to the video for 'Over The Wall', which got a ton of airtime on MTV.  They toured North America with Anthrax for this album and soon gained a pretty sizable following, which would only grow with each release.