Share All sharing options for: Homer Do Good?: Canucks & Flames 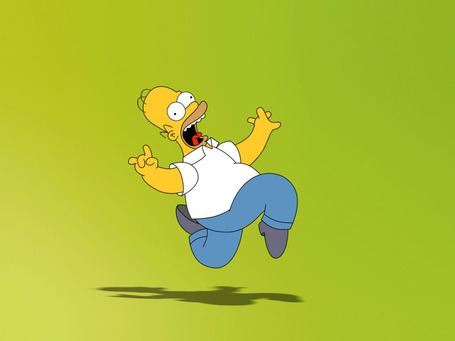 What more needs to be said? Tonight - in the final throw away game until September - kick back and savor what this roster has done. I've lost track of the records they've accomplished as a team, but if we had to wait 40 years for this level of dominance, logic suggests it doesn't come around too often. It's not over yet either: Schneider can help wrap up the William Jennings Trophy, Daniel can make one last attack at the Art Ross and Kesler has probably never been closer to the Selke. In their 82nd game - in pursuit of their 55th win and 117th point - they'll finally ice their top six defensemen. It's as amazing as it is comical.

Calgary limps into the summer again, but you have to tip your hat to their final few months. They were awful almost from the word go, but they made a season out of it and you can't say enough good things about Iginla. Also lost in their season is our buddy Morrison. Will he return to the Flames or will be play at the NHL level again? That's one of several questions for Calgary now. Should we expect them to lay down and be the doormat we saw in last year's season finale? Not bloody likely. Bad dreams are the ones most easily remembered.

In 24 hours, we hit reset. But for one final night this regular season, we're at the top of the hockey world. Drink it up.

Epiphany: This is just the beginning. Bring on the first round.