Share All sharing options for: Thursday Morning Coffee- The Legacy of Towel Power 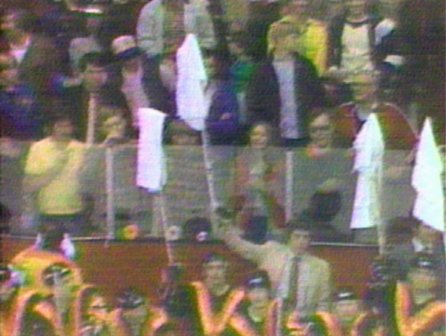 As the schedule comes to a close in this 40th Anniversary season, we've been able to look back at some of the great moments of the franchise.  Granted, there haven't been as many as we'd all hoped but if nothing we're optimistic and loyal to a fault, right?  Tonight however, as the Canucks celebrate their 1st Presidents' Trophy in team history, they are also paying tribute to the man who guided the Canucks on a magical run, and his gesture that created one of the lasting legacies for the Canucks and their fans: Roger Neilson and the white towel.  Tonight they will unveil a statue outside Rogers Arena commemorating that night in 1982 when the Canucks were getting shafted by the officials, and he raised a 'white flag' to symbolize the team's surrender to the seemingly non-sensical calls by the officials that night in Chicago.  The team returned to the PNE Coliseum for game 6 to a building full of fans, waving white towels in support, and that fever helped propel the team past the Blackhawks and into the Stanley Cup finals for the first time.

The amazing thing about the story is that Neilson was only the Canucks' assistant coach at the time.  Head coach Harry Neale had been suspended by the league for getting involved with fans during a brawl with the Nordiques in Quebec City.  They went 4-0-1 to finish the regular season and the rest as they say, is history.

I still get chills when I watch this.  And in this year where we remember the good moments of the team we love, they've saved the best for last.  Let's take the spirit of that moment.  Let's put aside all the fears and doubts.  Let's take a gesture of defiance and ram it down the throats of those who wish to see us fail.  Not this time.  Not to the Blackhawks.  Not to anyone.  This is our year.  This is our time.  Believe in Blue.

Adding to the emotion tonight will be the return of D Alex Edler to the lineup.  Edler had been out since having back surgery in January, and his presence on the blueline is a welcome one.  He had been the Canucks best defenceman this year, in my opinion and with Dan Hamhuis almost ready to go as well, the Canucks may actually have their top 6 D together for the first time come the playoffs.  Amazing to think of all they accomplished without having them for a single game together.

I wanted an omelet but the War Room told me I am having Cheerios...

I am sure you've seen it, if not here it is:

I am simply flabbergasted that this is allowed to stand.  There's no way to determine his stick makes contact with the puck, and the video showing the puck traveling the goal line certainly seems to suggest even the slightest touch didn't happen.  So that means the only thing that was conclusive about this video, was that he kicked it in.  Once again, I am not suggesting any conspiracy here.  But to even the most casual observer, when you look at the context of this goal, and the situation of the team who benefits from it, it reeks.  4 officials on ice, plus people in the War Room and no one is saying the goal is kicked in, when it was obvious to all including the Hawks play by play people?  This is just another reason why fans have so little faith in the league and its' officiating.  And another reason as well for Colin Campbell and Mike Murphy to step down from their positions... With that Hawks win and the Ducks kicking the crap out of a lifeless San Jose Sharks team, the Calgary Flames were officially eliminated from playoff contention.  I do feel a small bit of sympathy for Flames fans today.  It quickly goes away however when I realize that now they know what it feels like to have your team eliminated on a goal that was kicked in.  Sometimes karma takes 22 years.  Now all that's left is to see if Saturday's game against the Canucks is the last in a Flames uniform for Jarome Iginla...  The Dallas Stars are not out of it yet, and if they can win their last three, and get help from the Detroit Red Wings they can make the dance.  The Wings play the Hawks in a massive home and home to end the season, and may have to do it without Henrik Zetterberg, who suffered a lower body injury last night in the Hawks loss to Carolina... Los Angeles clinched a playoff spot last night with a SO win over the Phoenix Coyotes.  Should be interesting to see what happens, as these two teams could face each other in the first round...

The Stormtroopers Of Death were started as a one off side project featuring Scott Ian and Charlie Benante of Anthrax, former Anthrax bassist Danny Lilker and vocalist Billy Milano.  They got together and recorded an album of highspeed thrash/punk fusion that saw what some say was the first blast beats ever recorded by Benante.  The songs were brash and funny, bordering on racist in a couple spots but most of all just taking the piss out of things.  After a few legendary live shows the band called it a day, and Milano formed Methods of Destruction (M.O.D.) and had a couple more accusations of racism and homophobia hurled at him.  S.O.D. did a reunion show that was released as a live album/video and did get together for one more album.  The band may never reunite due to the strained relationship between Milano and the others.  Milano has a new gig singing for Toronto thrashers Mastery, who had a song that was used by the Carolina Hurricanes in their opening ceremonies during their Stanley Cup run a few years back.