My Army Training Tells Me That This Is Going To Be A Hot Mission: Canucks & Predators - Game II

Share All sharing options for: My Army Training Tells Me That This Is Going To Be A Hot Mission: Canucks & Predators - Game II 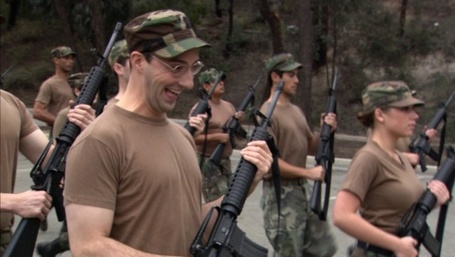 Little Kurdistan: On the Forecheck

Did You Know? Edmonton is a sister city to Nashville? Please, do judge away.

While the Thursday game was nice, we are keenly aware we didn't seen the real Predators: Fisher presumably knows what to do with a puck, Erat is still recovering, there is more to Weber than discussing his beard ad nauseum and WTF was up with Hornqvist? We did get a fine look at Mr. Rinne who enjoyed too many Canucks shooting directly into his glove (as long as your sickly author is at it, there were too many blind passes, drop plays and flopping around for my liking, but let's chalk that up to a switch in gears between series). Rinne is a great goalie, and it helps the entire defensive scheme collapses around him to clear up the junk, but he joins both Philly goalies and that chump Niemi as the only netminders left playing with a SV% below .900. He can be beat; Vancouver's problem in game one was they didn't help themselves with their plethora of chances.

I went back and looked at how the Ducks solved Rinne and it painted the following picture: 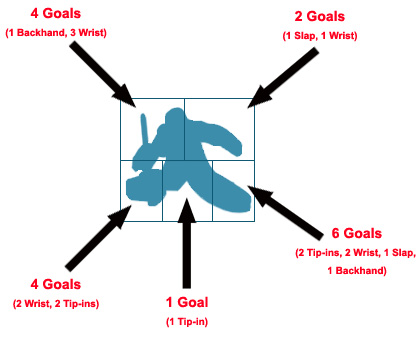 As the Ducks learned, the odds aren't in your favor if you're going high glove side (Rinne catches left). Rinne doesn't play as deep as Luongo and you could tell on Thursday the Canucks were trying to get him moving laterally to create some space but too many shots (a) fluttered high, (b) didn't produce rebounds or (c) ended up safely in the mitt. But holes two and four is where the lateral movement, a well timed wrister or good old puck luck can ruin him. Their rebound control is better than Chicago's, so unless they want to play one goal games from here on out, Vancouver needs to can the cute stuff, get Rinne moving and pounce on where he's vulnerable or hope some pucks have eyes in their favor.

(I'm not suggesting Vancouver mimics Anaheim entirely, otherwise I'd be in favor of mugging Girl Scouts for their cookies while strangling their kittens - otherwise known as "getting Getzlafed" - but there's some results worth considering.)

The Cap't said their shot selection has to be better and Alex Burrows added "We'll make his [Rinne's] life difficult tomorrow." If they don't want to wait until the final minute again to exhale, they better make that their mission. They can also take solace in the fact their depth players didn't lose a step from round one, if Kesler starts scoring it's a whole other can o' nuts, their defense is starting to get in a rhythm (Ballard is the clipping king of B.C.!) and Luongo simply doesn't look like he'll implode as his critics desperately want him too. One more minor complaint: if Samuelsson is hurt, sit him damn it. This isn't Def Leppard: we don't need a one armed guy keeping the beat on the top line. Plenty of other options.

The momentum is on the good guy's side: no split at home and send this series down to honky-tonk land with the Preds having more questions than answers.

These are my awards, Mother. From Army. The seal is for marksmanship, and the gorilla is for sand racing. Now if you'll excuse me, they're putting me in something called Hero Squad.

Our Hero Squad is just warming up (and full of award nominations).

Make us proud boys. Earn this.