Share All sharing options for: Fantasy Competitions: 1st Round Leaderboards 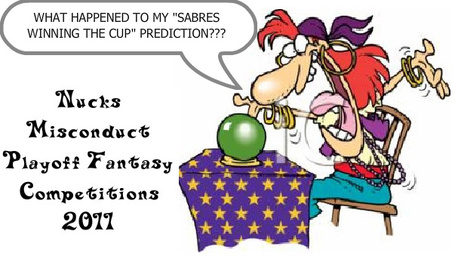 This has definitely been a great 1st round for the NHL playoffs. And since that segment is complete, it's time for me to update you all on the standings for the two NM playoff fantasy competitions. Since several of you were unfamiliar with the process, allow me to clarify that I post leaderboards at the end of each round. If you want individual results during a round, just let me know and I'll update my Excel tables to formulate your totals.

Anyways, after the jump you will find leaderboards for the two competitions. If you forgot your picks, here are the sign-up sheets for the team bracket and player competitions.

UPDATE: It turns out that there were some mistakes made in my spreadsheets for the players competition. The leaderboard after the jump has been corrected.

First up is the team bracket competition. Remember, it was 3 points for calling the winning team, with a bonus point for also calling the number of games. With 8 matchups, that results in a maximum of 32 points in the 1st round (which nobody got).

Congratulations to Passive Voice and mfarough, who both managed to call all 8 winning teams! The difference between the two is Passive getting more of the bonuses. Unfortunately for Tyr, calling such teams as Phoenix, Anaheim, Buffalo and Pittsburgh pretty much screwed them over. For those of you looking to catch Passive, keep in mind that the 2nd round matchups are worth 4 points for calling the team and 2 bonus points for also calling the number of games.

Next up is the players competitions. For each goal for assist one of your players earned, you got a point.

Canucks1619 did quite well, with their players averaging 6 points per game. Nice consistency, especially since all those players having moved on to the next round. Hodge didn't do so well, with picks such as Lucic, Boyes and Setoguchi.

Good luck with the next round, folks. I'll post another leaderboard after this next set of matchups.