Canucks. Hawks. Game 7. It Can't Rain All The Time.

Share All sharing options for: Canucks. Hawks. Game 7. It Can't Rain All The Time. 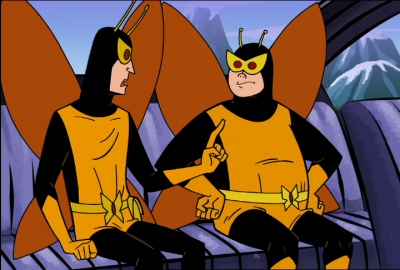 #21: Are you the bully of your school? Or the even the victim of bullying? Do you watch movies about costumed heroes and think, "Wow, that guy's a pussy. I sure hope a much cooler bad guy kicks his ass."?
#24: (unconvincingly) Wow, it's like you were reading my mind.

Forget how it got to this place, because most chose one team to win in 6 or 7. Call it a choke if you want, but they're still the Stanley Cup Champs. Either the Canucks are the team we thought they were tonight, or they're the team they've always been. Either they're going to be like the other 98% of teams in this situation and win, or it's the biggest in 40 years of shattered dreams, unrealized potential and bitter disappointment. It's not always going to be like this. Every dog really does have it's day. The 'Mickey Mouse' New Jersey Devils stunned everyone including Wayne Gretzky by winning a Cup. The Boston Red Sox shook off a 'curse' to win after over 80 years of futility. Yes I know they came from 3 down to beat the Yankees that year, but since some of you only look at the history you want, I am following suit. Hell, last night the poster child for NHL playoff failure shook off that moniker a bit. And if Joe Thornton can score a series-winning OT goal, hell... anything is possible.

Forget about the collapse. If it happens, it's out of our hands and nothing you say or do will let anyone forget it until they actually raise the Cup. Instead just focus on a few 'what if's' that go the other way. Instead of 'what if they fail', what if they don't? What if Luongo shuts them out again? What if Dave Bolland finally gets a penalty called on him? What if Corey Crawford crumbles under the weight of a Game 7? The Hawks save for maybe Marion Hossa haven't been to a playoff Game 7. What if things really are different this time? What if everyone's favorite whipping boys beat their tormentors when it matters most. It can't rain all the time.

There's nothing left to say really. The other NM writers have done a great job of analyzing the ups and downs of this series, and I stand by my assertion that this is the best Canucks blog on the net. So wherever you're watching the game tonight, enjoy this. Game 7's don't happen all the time, and we have more experience than them in these games. It could happen. It should happen. Believe. If not, I will see you in September lol. Coconuts? GO!!!