Share All sharing options for: I Find Your Lack Of Faith Disturbing: Canucks & Hawks - Game V 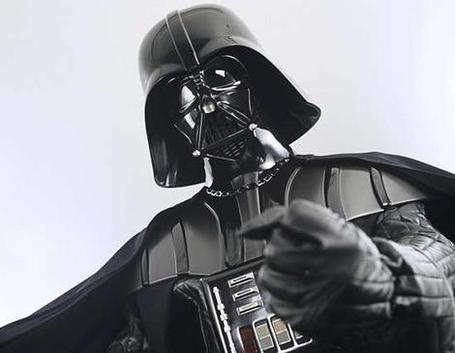 The chances are comically absurd you'll read this, but maybe enroute to your pregame piss you'll stroll by a section of your opulent locker room where perhaps someone left their laptop open that isn't locked in on "1001 uses for lingonberries" so you stop in to check in on your Cialis spam, inadvertently hit the "I feel lucky" button on the Google or do a quick search for "smug and preening" and end up staring directly at this page, curious why Darth Vadar bleeds into a letter addressed specifically to you. Life, indeed, is strange.

Before you go all crazy-eyes for the cameras, a phrase is worth repeating right now: earn this. Oh don't frown, I'm not a Tom Hanks fan either but Saving Private Ryan was a decent film. It's easily his best role since the 'Burbs. The 'Burbs? You've never seen it? You'll thank me. Great for all those flights you take.

When you're out there glance over at the guys in red: they're hurt, tired and driven by shades of their Cup run combined with the belief they can make you feel like Boston a year ago. Don't belittle it, know you can defeat it. There's no need to unleash the hounds of hell (otherwise known as the fourth line) to end this series. You know better than anyone with a Versus camera jammed in their "I just learned the English language yesterday" face they can't hold the twins back all game, especially on the man advantage. Kesler's done everything asked of him. Your third line has enough speed and sandpaper to give their D conniptions. Your defense has yet to flex their true muscle. Skate-forecheck-pressure-repeat. If that disappears entirely, the guys in red will own the neutral zone, own the slot and the potential for another game four skyrockets. But roll with what brought you here for 60 straight minutes and you'll have what made a certain someone the coach of a Presidents' Trophy team (am I even allowed to mention that?).

We asked last year who are the Vancouver Canucks: a paper tiger or sleeping dragon? Different year, same question. What say you?

Earn this. For yourself, the team and this city. Make us proud.

This will be a day long remembered.