Share All sharing options for: Tuesday Playoff Coffee- I have a couple things I wanna get off my chest 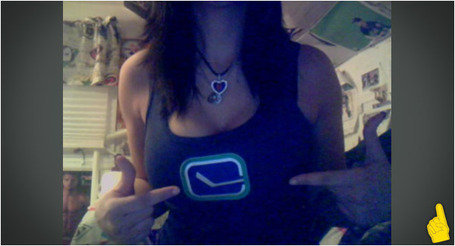 A lot of people didn't think that we would be in this situation.  In fact some 'experts' predicted that the Canucks, the best team in the NHL this season, would fall hard to the team that ended their post-season dreams the last 2 years in a row.  Yet here they sit, poised to send the defending Stanley Cup Champions packing in 4 straight.  And I don't know if that's the surprising thing, or the lack of class the Blackhawks are showing as they go down in flames.  Whether it's disses from team captain Jonathan Toews, to thinly veiled threats of retaliation against Raffi Torres that have an eerie similarity to a part of Canucks history we would rather forget, they're hardly handling this situation with grace and poise.  Perhaps we shouldn't have expected anything less from a team that was twice caught trash talking injured players as they were helped off the ice this season?  Either way, the Canucks have the opportunity to do what the Hawks did to them last season.  End it in front of the opposition team's fans.  Here's hoping they don't take their foot off the Hawk's throat for even a second.

As the title of today's Coffee mentions, there are a couple things I feel I need to say as we head towards tonight's opportunity to vanquish the Hawks.

1- If we win tonight, we're gonna celebrate- Of course we will.  There will be numerous comments referring to Canucks fans thinking they've won the Cup should this happen.  There isn't a a Canucklehead out there who thinks for a minute that this is anything close to a Mission Accomplished moment.  We know it's Step 1 of 4.  Sure it's gonna be a little bit sweeter should it happen, and when you consider the history between these teams, why shouldn't it be?  Sure we've got a better chance at winning the Cup with a win, but there's much work to be done before 'planning the parade route', as they say.

2- If we lose tonight, it's not a cause for alarm- I don't know of anyone who predicted a Canucks sweep, so it would hardly be a shock to be heading back to Vancouver for a Game 5.  Is it the end of the world?  Nope.  Are they in Luongo's head if they win?  Nope.  Disappointing if they should not be able to get it done, but considering only 3 teams in history have come back from a 3-0 deficit to win a series, it just ain't happening.

3- Keep it cool- I know the trash talking amongst fans is something you don't have a lot of control over.  Both sides have people who can discuss the game rationally and maturely.  Both also have idiots and assholes on their side of the fence.  Try and show a little dignity as winners.  If you're gonna chirp Theo Fleury, keep it to his prediction, keep it fun and keep it about his prediction.  Don't troll.  Karma's a bitch, and I'd rather keep her on our side, thanks.

Yes, there's that extra element of sweetness a victory against the Hawks will bring.  I was at Game 6 last year.  I saw Byfuglien taunt the fans.  It's time to put all that behind us and focus on the real goal: 12 more wins.  So let the Hawks players and fans disrespect us.  Really.  They can say whatever the hell they want.  The Canucks are doing it for us and not them.

The Boston Bruins got Zdeno Chara back in the lineup last night after missing Game 2 due to dehydration.  The Canadiens made it close, but Boston got back into the series with a 4-2 win and avoided going down 3-0 to the Habs... Pittsburgh hung on to take a 2-1 series lead over the Tampa Bay Lightning, the Penguins rattling off a 3-2 win.  Pittsburgh's Chris Kunitz and Tampa's Steve Downey have conference calls with NHL head office over their separate incidents last night... Brian Boucher stepped up for the Philadelphia Flyers last night as they went ahead 2-1 in their series with the Buffalo Sabres.  Looks like it might be goalie by committee for the Flyers going forward, eh?  And the Detroit Red Wings moved the Phoenix Coyotes closer to a possible move back to Winnipeg with a 4-2 win last night in Glendale.  The Wings can close it out with a win tomorrow night... And as you may have heard the NHL will be announcing a new broadcast deal with NBC/Versus, rumoured to be worth 2 Billion Dollars over 10 years.  As much as I hate Bettman, I have to give him credit for this.  Nicely done, Gary.

WAACH 'Cast's Classic Album Of The Day- ANTHRAX- Among The Living

The 3rd album from these NYC thrashers was a huge hit, firmly entrenching them with Metallica, Slayer and Megadeth as the Big 4 of thrash.  From the title track based on Stephen King's 'The Stand', the Judge Dredd inspired 'I Am The Law' as well as soon to be classics 'Caught In A Mosh' and 'Indians', this is one of the band's finest moments.  This was also the first cd I ever bought, and I still have.  I saw them on the tour for this album, opening for Kiss.  My first concert outside of Kamloops, and still one of the best I ever saw.