Friday Playoff Coffee- If You're Hard On Us, We're Gonna Be Hard On You

Share All sharing options for: Friday Playoff Coffee- If You're Hard On Us, We're Gonna Be Hard On You

Is it just me, or was that the longest wait ever between games?  That day felt like a week, but it's Friday (kicks anyone even thinking of that horrid abomination of a song) and game 2 is rapidly approaching.  The Canucks find themselves once again in the position to take a 2-0 lead against the Blackhawks in a series.  Unlike the last two seasons, the chances of them doing this are pretty good.  The Blackhawks are finding themselves in the conundrum that we all knew they would face, in that by shedding a good chunk of their character players, they would lean heavily upon their core.  Their top players have been playing huge minutes all season long and fatigue is no doubt setting in.  Add in the physicality that the Canucks showed in game 1, and guys like Partick Kane, Jonathan Toews and Marian Hossa are going to be getting even further worn down.

The question is, does coach Joel Quenneville decide to try and use his grinders in a bigger role, trying to get the Canucks to take penalties and get in Roberto Luongo's face?  That could backfire on them for two reasons.  First of all, team discipline has been the mantra this season, and it shows in the stats, as they didn't have a single player eclipse the 100 PIM mark.  Not chirping or retaliating has enabled the Canucks to get on the power play and make their opponents pay all year long, and should the refs decide to actually call some penalties on the Hawks tonight you can bet they will try and exploit a Hawks powerplay that has struggled all season.  As far as getting to Luongo, not only have the coaching staffed spent all season keeping him focused, but the changes in  his style of play will mean they will need to actually get into his crease to get at him.  I bet we see at least one goaltender interference penalty against Chicago tonight.

This series was set up and is still being looked at through glasses colored by their past meetings.  The Canucks winning both home games to start the series will alter that, and we will see how this Hawks team responds to the pressure of being down a couple games to Vancouver.  Will Corey Crawford be able to keep them close as he did in game 1, or will the pressure be too much?

And in case you didn't hear, the auction for the services of Chemmy from PPP and Ryan Lambert of Puck Daddy was won by a Blackhawks blog, so they along with some of their pals will be unleashing hell upon us today.  Personally I look forward to it, because when they Canucks triumph it will make for fun reading down the road.  Heh.  In all seriousness those gents are to be commended for a great idea, and for raising the money for Right To Play, which is an awesome cause.  So remember, breathe and don't the let the bastards drag you down.  They won't be trolling for too much longer...

Well that was certainly an interesting evening of hockey, as you can safely say that all three matches didn't go the way that many thought they would.  Sure, the San Jose Sharks won, but after scoring 27 seconds in, did anyone think the Los Angeles Kings would even make it close, let alone take it to overtime?  A great game from Jonathan Quick and a gritty effort overall from a banged up Kings squad came up just a little short as Joe Pavelski scored in OT for the Sharks... Two more shutouts last night, and both of them were by the road teams.  Brian Gionta scored early in the first and silenced the crowd in Boston, and with Carey Price bolting the door shut, the Canadiens knocked off the Bruins 2-0.  That series is far from over, but after Boston's collapse last year against the Flyers in the first round you have to think the seeds of doubt are starting to sprout... The Buffalo Sabres got a prototypical Ryan Miller performance last night as Patrick Kaleta scored his first goal since Dec 27.  It would be all that the Sabres would need, the Sabres defence, led by Tyler Myers stifled Philadelphia at every turn... 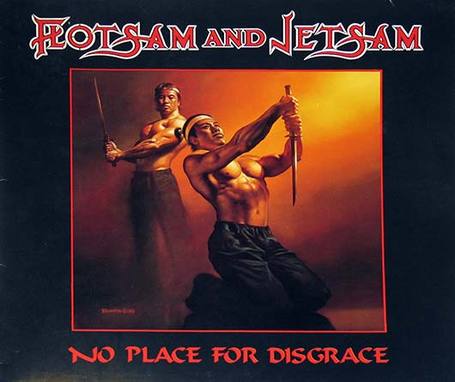 Having recently signed to Elektra Records after losing bassist Jason Newsted to Metallica, the second album from Arizona thrashers would become a classic, with their European flavoured speed/thrash.  The cover art was done by legendary fantasy artist Boris Vallejo, and featured a cover of Elton John's 'Saturday Night's Alright For Fighting'.