The Time Is Nigh: Canucks/Hawks Predictions

Share All sharing options for: The Time Is Nigh: Canucks/Hawks Predictions 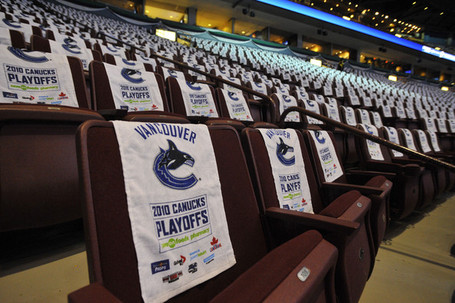 Your faithfully obedient NM crew has been coaxed out of the basement with the promise of Hot Pockets and grocery store-brand grape soda provided we slam our heads together, stumble around a bit and drum up the best quarterfinal predictions this side of a randomly tossed salmon.

Take the jump and give us your feeling for the opening round in the comments.

I suppose if you believe in playoff curses or otherworldly mystical bull you'd think that the Canucks will never ever ever win a playoff series against the Blackhawks. Because I'm a geek, I crunched the numbers of the last two Round 2 series' and found something I was not at all expecting: an almost even EV PDO (100.6 % to 100.9 %). Since PDO is a statistic that measures a team's luck [ EV shot percentage + EV save percentage ] it's almost surprising to see that the Canucks got the benefit of bounces or bad goaltending.

What that means is that the Canucks weren't subject to the stars being off place, it's just that they played badly, and anybody who remembers those games remembers the defenses inability to move the puck from the slot. Mike Gillis went out and got Dan Hamhuis and Keith Ballard, and, due to some great luck with injuries this season, all six of our best defensemen fit under the cap and are finally together at the most critical part of the year. Chicago lost Dustin Byfuglien, the guy who probably won both series' on his own with his play in front of the net harassing Roberto Luongo. As a result, the Canucks gave up 7.3 shots per game on Chicago's powerplay and held just 45% of the total shots in both years. These are numbers that will improve because, well, our team as a whole is better this year.

The numbers indicate the Canucks got outplayed in years where the skill difference between the two teams was minimal. This season is different. There is no curse, and the only VooDoo I see going down at Rogers Arena this year exists in wistful memories of the old roller hockey team. Hey, the statue unveiled in front of the arena last Thursday of Roger Neilsen should be enough to exorcise the demons, again, if you believe in such things, since the Canucks kicked the puck out of the Blackhawks when they played in 1982, the very series' wherein Roger initially raised that towel.

I want this one bad. So will the Canucks, who will win it on the road in 6 games.

I'm disappointed.  Seriously.  I didn't want to face the Blackhawks until the 2nd round.  That would've made our revenge perfect.  Oh well, looks like it will be the 1st round instead.  We all know the basics already.  These two teams hate each other, and are about to face each other in the playoffs for the 3rd year in the row.  Both teams have drastically changed over the last year, with Chicago losing their Cup-winning depth to cap restrictions and Vancouver becoming what is possibly the best in franchise history.  I believe that the 3rd time will be the charm, and the Canucks will come out victorious this time in 7 games, earlier if we're lucky.

Here are a few brief thoughts on what to expect during this year’s edition of the annual Canucks/Blackhawks Spring Jamboree. The Sedins totally have the three-legged race wrapped up, although Kane and Toews may give them a run for their money. Okay, seriously, we know this will not be a picnic. But here is why I think the Canucks will win this series:

Roberto Luongo steps it up

There’s no Dustin Byfuglien this year, and Luongo looks sharper than ever. The Hawks will try to get to him early and get him off his game, but I’m betting his demeanour will be calmer and he will get offensive support he needs to relax and play his game.

You know it will be a chippy, physical series, which will mean a fair number of powerplays both ways. Even if you consider the PPs a wash (the Hawks weren’t far off the Canucks in the regular season) I like the Canucks’ PK, even sans Manny, to be the better unit and make the difference.

I don’t know why, but I have a feeling CoHo is going to do something big to help win a game at some point. It might be a clutch late-game or OT goal, a nice assist, or a surprising defensive play. But somehow I just think the kid is going to have at least one HUGE moment during his time in the series.

The Canucks’ depth wins the day In the past two years

Chicago has gotten clutch game- and series0changing performances from its third and fourth lines. This year it’s our turn. I could see Jank, Raffi Torres (when he’s back in), Jeff Tambellini (if he gets in), and/or Tanner Glass coming up huge for us at a big moment. Hopefully this does not mean that they will all be wearing Thrasher blue in 2011-12.

We see Marty Turco in this series

I am expecting that Corey Crawford will crumble at some point during the series and the Canucks will blow him out of the water. And whether that results in him getting yanked for a game or for the series, I think we’ll see our old First Round nemesis Marty Turco between the pipes for Chicago at some point.

My Prediction: Canucks in 5. I think the series will be close during games (minus that one Crawford meltdown), but that the Canucks superior depth and cool-under-fire demeanour will allow them a 5-game series victory that will belie the intensity and closeness of the games.

This series has been speculated to death.  The rhetoric existed before the matchup was even finalized.  We all know what happened last time out.  They tell us that they're in our heads and they own us.  Yet they have just one game this season where it looked like that might be true.  Look at the Canucks record since then and how we played them following that game and tell me why we should be worried?  Yes, they're still a good team.  But they're not the team we lost to, and we are not the team they beat.

There are people across North America who would love to see the Blackhawks leave us crushed again.  I am here to tell you that there is no reason to fear.  We are better, physically and mentally than they are.  They're focused on mind games; we're focused on 1 game at a time.  There will be name calling.  References to Luongo crying.  Accusations of various things about Kesler and Burrows.  It's all designed to try and get them, and us as fans to lose focus.  You know why?  It's all they've got.  They have to hope we don't play the post season like we have all year long, because if we do, they're the first body we leave on the side of the road to the Cup.  Fuck the Hawks and especially that hipster douchebag wannabe Kane.  Canucks in 6.

After 2 defeats in consecutive post seasons against Chicago it's time for the madness to end. It's tough to recollect how the Canucks were beaten by the Hawks in 2009 and 2010 so I went to the highlights on YouTube. Dear God. What a painful experience that was. In the 2009 series the Canucks blew a 3-goal lead once (early on too, not a good thing), a 2 goal lead once, and a 1 goal lead 5 times! You want to talk about psyche and all that. Well that kind of stuff will kill you.

In the 2010 series the Canucks didn't do much of that. They were just dominated. Luongo was not as sharp but a couple of things remained the same:

1) The composure as a team was sorely lacking, from Luongo-out.

3) And this ties into #2: too many odd man rushes against and lousy coverage in front of Luongo

It's time for Vancouver to establish itself as the better team against the Hawks. They need to take control of games and be able to handle the ensuing Chicago onslaught when having the lead. Whether it's by not acting like a bunch of headless chickens in their own zone or by continually attacking even with the lead. That's something Chicago has done against us and now it's our turn. Take it to them for god's sakes. The Hawks will continually crash the net and try pester Lou like they have in the past and the Canucks need to prevent that and clean up the shit in front of Lou.

Our team lost its focus and it lost its discipline it seemed after the shorthanded goal in Game 2 and had real difficulty regaining it...We played our style of game in one other game of the series and we weren't going to win with that. We have to get to the bottom of why those things occurred and we need to definitely improve in certain areas with the personnel.

Two years ago Vancouver couldn't contain Chicago's speed, skill and lost their composure as a result. Last season Vancouver was hampered by injuries and still got burned on speed, skill and a lack of discipline. That quote above is from from Mike Gillis after Chicago drove the nail in their coffin last May. He talked about focus, style of play and changing the mindset of the players.

This season's team was built from the ashes of these failures, one that has capable defenders instead of shoving SOB into a top pairing, one that has a third line devoid of Bernier-type experiments and a team-first mentality in lieu of the score-settling and message-sending of the past. Maybe most important of all, they're healthy.

Vancouver doesn't win this series if their defense folds. They simply can't allow Chicago to own their crease and dictate the play with their physicality. The blueline will be under constant pressure to stop the core of the offense that hoisted the Cup and room for error is slim to none. Then there's Luongo who shed the "C" and beat back some demons along the way but this is the one stage he must excel at and one opponent he has to defeat. The goals will come, but these six men are where this series will be decided.

It's been 337 days since Chicago eliminated Vancouver and Gillis demanded adjustments. The Canucks were built for this moment and don't belong in the same breathe as the name of the trophy they have fought so hard for if they can't win here and now. It's time to earn this.