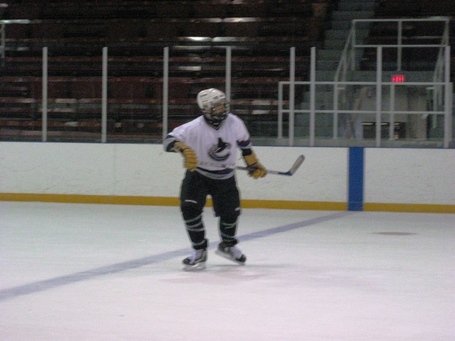 MLX ice hockey skates are a new entrant on the skate scene, and have already won over a number of NHLers. The skates were designed by former US Olympic speedskater Joey Cruikshank, whose experience as an NHL skating coach inspired him to design an improved skate for high performance hockey player. The company is supported by none other than Mario Lemieux. MLX approached Nucks Misconduct to see if we would do a review of their product and, lucky me, I got the job!

The picture above features a player who not only has the same MLX skates as Mario Lemieux, but who also has comparable talent, ability, and good looks and who could've totally been an NHL star if he'd only got a chance and he hadn't had the flu during that one tournament where the scouts were there: me! And yes, those gloves predate Mario's career by three decades; fortunately I now rock new MLX skates to offset them. The picture was taken by friend (and talented photographer, including of Canucks players) Courtney during a weekly pick-up game at University of Toronto. Unfortunately it was taken with my crappy point-and-shoot while she was recovering from a shift on the bench, so it's not quite Sport Illustrated cover material. Close though.

Before I begin this review, full disclosure: I received a free pair of MLX skates in return for writing this review. It's kinda like how music reviewers get free CDs or book reviewers receive free copies of books-only a whole lot cooler, because I got new hockey skates. I am writing this review as impartially as possible, in order to give you my honest opinion of the product. And apologies that this has been so delayed (it was initially supposed to go up in November or December): it took longer than expected firstly because MLX took longer to make larger sized skates (each skate is custom made based on the specific measurements of the customer's foot); and secondly, because, after receiving the skates in December, a pulled hamstring and then a sprained ankle kept me off the ice for January and most of February. I am happily back to full health and have been able to try the skates out a few times now.

MLX's website focuses on three major components of the skate: comfort, performance, and protection. I've divided my review into three sections to assess each of these areas, sandwiched between my first impressions and my conclusions. The review follows after the jump.

The first thing I noticed about the skates, before I even took them out of the box, is how light they are. I have always had bottom of the barrel skates (entry level or second hand Bauer or CCM) and, though functional, they can be a little clunky. MLX skates on the other hand? Light and sleek. The next thing I noticed, after opening the box, is that they look pretty cool. I'm not much of an aesthetic person when it comes to sports gear (Exhibit A: my hockey gloves), but I think these look pretty sharp - then again, maybe this is just in comparison to the old, beater skates I used previously. 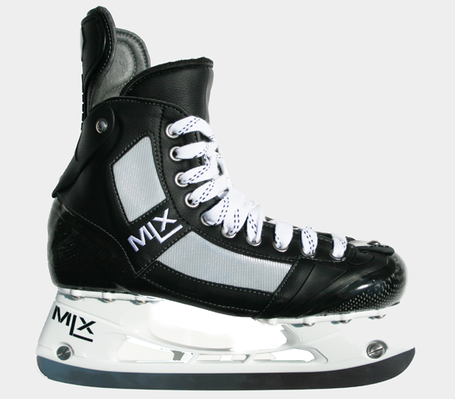 Before using the skates, you need to heat them in an oven, put them on, and allow them to mould to your feet as they cool. Despite following the instructions to the letter, I discovered that this heating process very slightly warped the outside of the skate - not at all affecting performance, but slightly detracting from the aesthetically pleasing "new skate" look (it just looks like a scuff on the boot). I would therefore recommend taking a few minutes off the suggested "cooking" time and checking how the skates are holding up, especially as ovens can be of variable quality. As for the slight warping, it's not a big deal to me and totally worth it for the much improved fit. Speaking of that improved fit...

These are far and away the most comfortable skates I have ever worn. Like I said, I am not coming from skate royalty here, but nonetheless these were great. MLX warned that your feet would hurt the first time on the ice, but I had no such issues. First time on, and every time thereafter, the skates fit like a glove and caused me no pain. I give MLX credit in two areas regarding comfort: the heat moulding and the custom sizing. On the latter point, I had to measure both the length and width of my feet and then use that to determine my size/width of skate. MLX then made the skate to those specifications (thus the initial shipping delay - but totally worth the wait). This, along with the heat moulding, results in a skate that fits like a glove. I actually bought thinner skating socks so I could fit in the skates better than if I wore regular socks (no Bobby Orr barefoot skating for me, thanks).

Unfortunately I have only gotten to try out the skates a couple times, but I have felt a little faster and definitely less cumbersome than in my old skates. Not that I'm about to challenge Mason Raymond to a race or anything, but still... I think the biggest difference for me, versus "off the shelf" skates like the pair these MLX skates have replaced, is that the snug fit of the skate makes it feel like an extension of your foot rather than something that you are constantly aware of and fighting with - in other words, the skate and thus the skating motion feel much more natural than a clunky, less well-fitting skate (part of my problem with "off the shelf" skates may be that I have wide feet, and thus either had skates that were either too long, to get a bigger boot, or too narrow). One feature that I have yet to try, but that I am definitely curious about, is the adjustable blade. As the MLX website explains:

The problem with typical ice hockey skates is that blade holders are not easily adjustable. They're riveted into a "one size fits all" position that is nowhere near optimal for the way you skate. Everybody has different techniques and body designs that require unique treatment for optimal performance. Whether you're bow-legged, push more forward, or lean backwards on your skates, you need to position your blade so that it matches your unique style  of skating. . . . You can't fully push on your skate if the blade isn't completely underneath you. When your blade isn't centered underneath you, you have to compensate in your stride, which slows you down.

Well that explains why I've been such a slow skater all my life! Seriously though, MLX has made the skate blade easily adjustable to allow the skater optimize the blade position. While this seems like a no-brainer feature on high-level skates, it was apparently not available on hockey skates until now. Good on MLX for adapting this speed-skating feature to hockey skates. The only problem I see with this is that it either a) requires a lot of trial and error to figure out the right positioning; or b) someone with a good knowledge of skating to analyze your stride and make recommendations. Because of my limited time on the ice this winter I did not play around with this feature, but I plan on looking into it next year to see if I can use it to my advantage.

I'll be honest: At my level, I am not exactly facing Al MacInnis or Sami Salo blasts out there. Nonetheless, having taken a (relatively weak) shot on the foot before, I can tell you that it hurts a lot. Enter MLX's composite design:

When composite takes a shot, it will disperse energy away from your  foot. A typical skate will cave in, transferring the force directly to your  foot and then rebound back to its normal shape, meaning your foot took  most of the impact which usually results in serious injury. . . . The composite support structure of the MLX skate is designed to withstand the normal impacts from the puck and stick during a hockey  game.

I can't say that I've had, or am keen to have, a prime opportunity to test out this feature. But I am reassured that thought has gone into protection, which is again something that can be pretty spotty with cheaper skates. I am sure down the road, when I do block a shot or take an errant slash to the foot I will be grateful for this design. You listening, Daniel Sedin? (Knock on wood...)

As you may have noticed, I am a fan of these skates. They are comfortable, pleasurable to wear, have turned me into a veritable Pavel Bure in my rec games, and look pretty snazzy to boot (okay, one of those statements may stretch the truth slightly). I really only have one major issue with the skates: the price. The SRP on these babies is $799, which is way out of the price range of starving students (such as myself) and even many professionals with steady incomes, unless they are passionate hockey gear-heads. Purchasing these skates would certainly be a considerable investment. However, there are two silver-linings to the issue of price:

So if you are a) a serious hockey player; b) a serious gear-head; and/or c) have $500-800 in disposable income kicking around, then I recommend these skates to you. Also, if you are considering buying a midrange skate in the $300 range, you might want to consider if MLX will offer a better long-term investment, particularly if you can get a cheaper blemished pair (obviously you will have to make this call based on the weighing of various factors). MLX skates are certainly not within reach or a wise investment for every hockey player, nor do they pretend to be; the skates are a high quality product and priced as such. If you can afford them they are fantastic ice hockey skates and I highly recommend them.