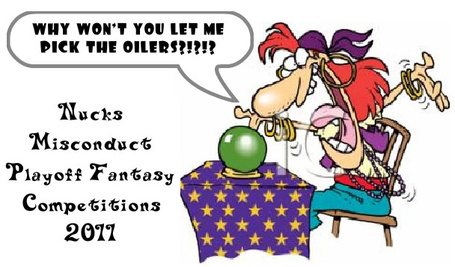 I'll probably just keep this woman and update the speech bubble through the leaderboards after each round.

As many of you will remember from last year, I organized a couple playoff fantasy competitions, one team bracket competition and also a players competition. This went over very well, and is definitely worth giving another whirl this year. Can Sean and eightyseven defend their titles? Can Section do better than both his 2nd-place finishes? We will soon see. But first, we need to get some planning out of the way. Do we want the competitions to stay exactly as they were, or are some changes needed?

This competition was much easier for me to organize. You basically try to call the winner of each matchup, and how many games it would take, for each matchup in each round. In the first round, calling the correct winning team in a matchup was worth 3 points, with 1 bonus point available for also calling the correct number of games. For example, a "Canucks in 6" prediction would get you 4 points if Canucks won in 6 games, 3 points if Canucks win in 4, 5, or 7 games, and 0 points if the Canucks are eliminated. The number of possible points in each matchup increased in each of the following rounds.

This competition was the tougher one to organize. You got to pick 14 players from the 16 playoff teams, with a minimum of 3 defencemen, a limit of 1 player per team, and a maximum of 800 points combined from your 14 players over the regular season (final amounts). Each goal or assist earned by a player gave you a point. There were also bonus points for game-winning goals, series-winners and the Cup-winning goal.

Thoughts for this year:

I was very happy with the team bracket setup from last year, so I would like to keep that the same. However, I would like to make a couple changes to the player competition.

I would love to make these two changes. Changing the points would make my life easier, while changing the limit of players per team will add the drama that you guys would love to have. This players competition format with the original team bracket setup would be my ideal option.

Another option that we were tossing around last year was somehow combining the team bracket and player competitions. This would be a bit more complicated for me to plan out onto an Excel spreadsheet, but I would probably try to somehow combine elements of the above formats.

So, please vote in the poll below for what formatting you would like for the competitions. When the final game of the regular season ends on Sunday April 10th, I will put up the sign-up posts, where you can see the final decision on rules, and sign up by putting your picks in the comments. If you vote for either the combined or other, please make suggestions in the comments, and anything that gets a significant number of rec's will be considered. And yes, you're allowed to vote for one of the presets and make suggestions for very slight changes (such as # points for certain things).