Share All sharing options for: Thoughts on Canucks Nation 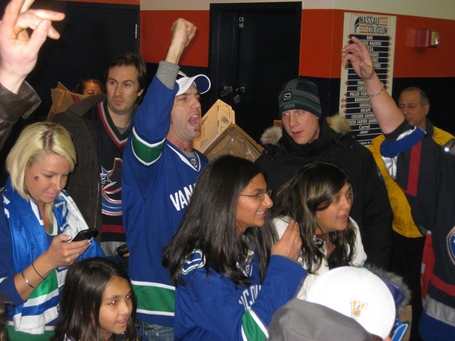 As is probably pretty clear from many of my posts here at Nucks Misconduct, I am keenly aware of and fascinated by the process by which fans express their passion for a sports team while living far away from that team's home city. In the past five years I have watched the Canucks play road games in San Jose, Buffalo (twice), Toronto (twice), Long Island, New York, and Washington, all while residing roughly 3300 km away from GM Place Rogers Arena. And in each instance (some of which I have documented on this blog) I have been fascinated to observe Canucks fans in an enemy rink and to watch, over the years, a steady increase in the number of fans at a given road game.

It would seem this season that "Canucks Nation" has become a continent-wide phenomenon. Except for one blast on the Staples Centre horn following a Kings goal, the arena noise at the most recent games in California made it sound like the Canucks were playing to an appreciate Rogers Arena crowd. Puck Daddy is the latest to note this phenomenon, which seems to have spread from a handful of supporters at a given game to a full-blown fan movement to represent Canucks fans at certain road games - Canucks Nation left an impression in Anaheim this weekend, while I personally observed a significant representation of Canucks fans in New York earlier this year. I find this as intriguing as it is awesome, and in this post I explore three questions about this fan support that I find particularly fascinating.

The obvious answer this season is that the team kicks ass and it is often cheaper to see the team in road arenas - so why not make a road trip out of it? But I think that explanation ignores many other contributing factors. On the hockey side, I do think the Canucks overall run of success since 2001-02 has both solidified the team's place in the hearts of many Vancouverites and attracted a host of new fans. The sellout streak of 343 games began in 2002, but how many fans remember the crowds of 14,000 at The Garage in the late-1990s? I do, because I was there for many of those sparsely-attended matches. Now it is near-impossible to find a (affordable) ticket at Rogers Arena, and not uncommon to see over 1000 Canucks fans at games thousands of miles from Vancouver. I think that the slow and steady build-up of the Canucks' fan base over the past decade has built a critical mass of supporters who will go to considerable lengths to see the team play. On the financial side, it is important to note that the Lower Mainland has become an incredibly affluent area with booming population growth. This has presumably made travel to road games a more accessible option for increasing numbers of Vancouverites. Taken together, these factors have contributed to the growing number of fans at road games.

2. What role has the internet played?

This is speculative, but I believe that the rise of online fan communities (such as this one) has played an important part in facilitating mass attendance at road games. The internet makes it easier to connect with fellow fans and to plan group trips. I have never partaken in such a venture myself, but I (and many of you reading this blog) can personally attest to the important role that the internet can play in building a fan community - witness the Nucks Misconduct meet-up in Vancouver last November and our upcoming Toronto meet-up. The internet allows strangers to connect over common interests, to build personal (if virtual) relationships, and to arrange face-to-face meetings. I would hazard a guess that at least some of the many Canucks fans who trekked down to Southern California on the weekend organized themselves online.

I am of two minds on this question:

On the "no" side, generally fan "nations" are associated with teams that represent a broader religious or ethnic community (e.g. Celtic or Rangers in Scottish soccer) or a city that has a significant diaspora as a result of shifting political and economic landscapes (as with Steelers Nation, which consists in large part of ex-Pittsburghers (and their children) who left the city as its industry died in the 1970s and 80s (the city today is half the size it was at its peak in the 1960s). Neither is applicable to Vancouver, which is a very multicultural (or multinational, to stick with the "nation" theme) and has never had a significant net outflow of citizens.As a result, I am not sure if nationhood is an appropriate concept through which to understand Canucks fans.

On the "yes" side, I think the term "Canucks Nation" is very appropriate in capturing the cultural importance of the hockey team to many Vancouverites from across diverse ethnic and national backgrounds. The popularity of CBC's Punjabi broadcasts is just one example of the ways in which the Canucks are a significant trans-cultural institution. Furthermore, given Vancouver's geographic isolation from the rest of Canada, I believe (admittedly without statistical support) that there is a significant ex-Vancouverite community across the country. I have met many BCers at road games who have, for one reason or another (usually work or school), moved to Eastern Canada but retained their passion for the Canucks. For these fans-abroad, the chance to watch the Canucks in-person and to socialize with other fans is a huge opportunity. I can personally attest to this from some of my many conversations with Canucks fans in beer lines, at urinals, and in the stands at road games. Even knowing absolutely nothing about a total stranger, I still know from their jersey, t-shirt, hat, or painted chest that they are a Canucks fan - and that automatically creates a certain sense of solidarity between us, at least in the context of a hostile road arena.

Ultimately, I would have to dispute the use of the term "nation" if I wanted to get technical and/or academic about it. However, I find it an effective concept to explain and describe the phenomenon of Canucks fans invading the home rinks of other NHL teams. So, as a fan and a Vancouver exile, I say "Long live Canucks Nation!"