Share All sharing options for: Canucks Pick Up Presidents' Trophy In 3-1 Win 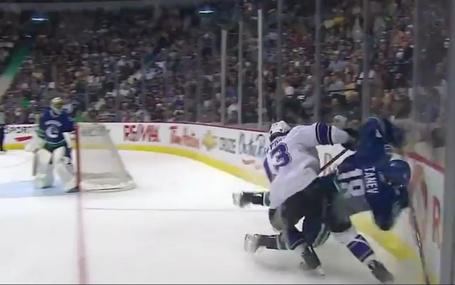 The Canucks have scored the most goals in the NHL (253), allowed the fewest (177) and have recorded the top power-play and penalty-killing percentages (24.7% and 86.6%, respectively). No club in the League's 'expansion era' (since 1967-68) has finished first in each of these categories in a single season.

By dusting off the Kings 3-1 tonight, the Canucks picked up the President's Trophy for the first time in franchise history and gave all the doubters the first symbolic, tangible item to blame should they not go deep into the playoffs.

For those of you back in the real world, it's a simple reminder of what the Canucks have accomplished this year. We've seen the numbers for weeks now. This is no accident. Even the most biased Canucks fan didn't see this type of year back in October. Soak it up (for now) and enjoy it.

> The Clifford hit above only happens because (a) the officiating let this game get out of hand; (b) the lack of any real response this whole season from the league on these types of hits; and (c) Tanev makes himself vulnerable quite often, so maybe the rookie learned a big lesson here. May as well spin the wheel. Tanev popped up pretty quickly though, but remains questionable with an upper body injury for Saturday.

> For the second game, the Canucks didn't open the scoring but took the game away in the third. Just as with the last time these teams met, Vancouver turned it up a notch in the final twenty and buried the Kings at even strength. It only got worse obviously once Clifford left and Greene granted them a 5-on-3 to seal the deal.

> I thought the Raymond experiment worked well enough for the third line. On several shifts he, Hansen and Torres were buzzing and doing a great job bottling up Brown and Smyth, both of whom ended up with a team-worst -2. Even the fourth line was honest, leaving Henrik Sedin to take all the "WTF!" penalties early on. That said, what Sekeres and company brought up during the first intermission remains noteworthy: how long with Vigneault adjust those lines before he's comfortable?

> Shots on goal in third: 16 - 0 VAN. If you combine that with the Nashville game, that's a comical two shots against in the final frame against teams battling for their playoff lives. Not bad for a short-handed defensive crew.

> Quick deserved a better fate. He had some very solid saves through the first when the Canucks were pressing and then some when the game got out of reach.

> I could watch this until my eyes bleed.

> Canucks held the Kings to one goal in three of their four meetings this season. [h/t Jeff Paterson]

> Daniel Sedin cracks the century mark with his two points tonight and remains eight up on St. Louis for the point lead. He is five goals back of Perry for the Rocket Richard. Luongo picked up his 37th win, still tops in the league.

Vancouver gets a day of rest before welcoming Edmonton to town Saturday night.