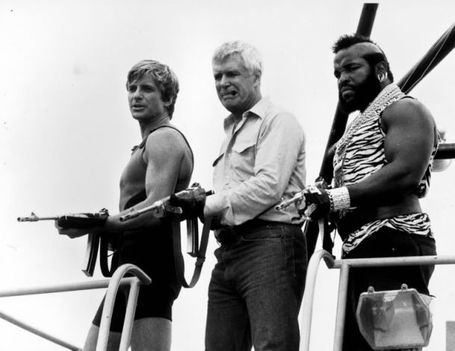 City Pro: WoW fan? Book your trip to Anaheim for the fall.

During the 2007 playoff round between Anaheim and Vancouver, I had a back and forth with the Brigadier General of Awesome Earl Sleek at BoC that involved several A-Team references so I thought I'd dust them off again. Though I guess Earl won that round (*shakes fist at the sky*). I still hate Rob Niedermayer.

As of this writing, no further Canuck blueliner has been injured. Tanev slots back in for busted Ballard and AV can no longer afford to shield him from the top opposition or zone starts. Then again, the kid has shown he can handle the pressure and nothing we've seen so far suggests he'll buckle now. Ginger Jesus returns to save us from all that's evil and the team usually responds with strong play in front of the kid. Why? I have no idea. No wait, yes I do. Up front - since the Ducks bring out the best in everyone - Tambo will sit for Volpatti on the fourth and Sammy will be eying another big game as he's three points shy of 300 career points.

Anaheim coughed up a promising rookie today in order to jettison Lupul from their ranks in exchange for Beauchemin, a move that sounds like they could have forced a better return. Nevertheless, Beauchemin won't play tonight and a dizzy Hiller yields the cage to back-up McElhinney who pitched a 3-0 shutout in his last game. The Sedins have a date with Lydman/Visnovsky and the Kesler line may draw Fowler/Lilja. If the Ducks want to risk running out Brookbank or Sutton against our top six, feel free. Up front their top line is as sick as they come: Getzlaf returns and he's on a point per game pace career-wise against the Canucks, Ryan is closing in on his 100th goal in just four seasons and Perry leads the team in goals and points.

Both games this season have been 5-4 decisions courtesy of the shootout, one win per side. Both power plays have been on fire so if it comes down to the kill, the good news is that Vancouver is flawless in six whereas Anaheim has coughed up five in their last four.