The Senators are riding the quick bus to NHL hell right now. They have lost 9 straight. They have won only 1 game since Boxing Day. Serious. 1-11-4 since. Did you know that Jason Spezza was injured in that December 26th game? He just returned to the Senators' lineup on Saturday..a 5-3 loss to the Islanders. The Senators were 9-6-2 heading into their game against the Canucks on November 11. They lost that game 6-2 and went 7-10-3 up to December 26.

The goaltending situation in Ottawa is not so stellar. See the links section below.

Life is so much better in Canuckland. Winners of 5 straight. Leading the NHL by 2 points over the Flyers. Leading the Western Conference over the Red Wings by an astounding 9 points. Leading the Northwest Division over the Minnesota Wild by a whopping 18 points. Does complacency set in with these guys? Well it kind of did against Chicago last game but a monster game by Roberto Luongo and their special teams put the pesky Hawks away. So how about against a mentally wrecked Senators team? We'll soon find out.

-The goaltender woes in Ottawa and what Bryan Murray might do about it. (Ottawa Sun).

-Reasons for Sens fans to be optimistic (Examiner.com). No, it's not referring to this season.

-Something Bad Will Happen. It Always Does. (Ed Willies, The Province) Easy now..

-In 1977, Scotty Bowman turned down a job as Canucks GM. (Vancouver Sun). Can't imagine why. He was right in the middle of winning a shitload of Stanley Cups.

-Did Mike Gillis Jinx His Players? (The Checking Line). Only if you believe in Santa Claus.

-Alexandre Burrows: 4 goals and 3 assists in his last 6.

-Mikael Samuelsson: 3 goals and 5 assists in his last 5.

-Chris Campoli: 1 goal and 4 assists in his last 2 games.

How long can you listen to this before turning it off? 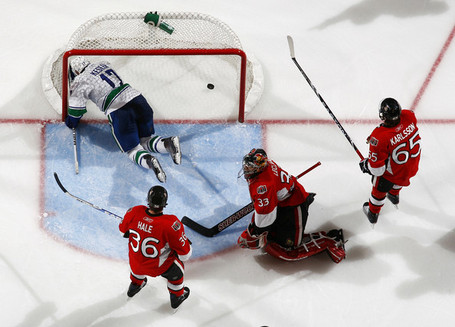