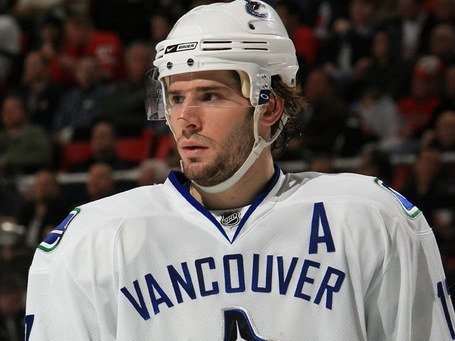 The Vancouver Canucks are back on track. Winners of 4 straight, the last of which was a 6-0 victory over the slumping Phoenix Coyotes, The Canucks have a 4 point lead over the Philadelphia Flyers for first in the league (That feels amazing to say). The game tonight in Phoenix was one of the most complete games I have seen played by the Nucks. From Luongo's 23 save shutout, to the great play by our rookie call ups. All engines are firing, so to speak.

The canucks scored on their first shot, a point shot from Daniel Sedin, which was tipped in by Alexandre Burrows (for his 200th point of his career). Ryan Kesler continued his strong play, netting 2 goals, meeting the 30 goal marker for the first time in his career. Biggest story of the night was Cody Hodgson scoring his first NHL goal, in only his second game. Rookie defencemen Chris Tanev and Lea Sweatt also played very well, filling in for the injured Alex Edler and Andrew Alberts. Tanev went +2 and played just over 15 mins, which is very impressive for a rookie defenceman. His position is stellar and he always seems to be in the right place at the right time.

Keith Yandle seen his league leading 10 game point streak come to an end, and towards the end of the game was issued a 10 min misconduct and was ejected from the game.

I have been a fan for a very long time, well as long as my age allows, and I have never been so confident in the way the Canucks are playing. Its great to see and hopefully they keep it up! There will undoubtedly be slips in play, but at least we aren't Calgary Flames fans ;).

All for me tonight. Take it easy Canuckleheads!