Share All sharing options for: Stars At Canucks Game Thread: "Release The Prisoners!" 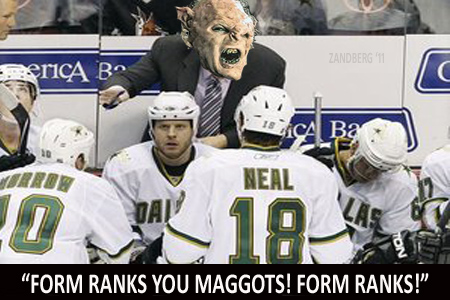 Injuries and the failed effort in Nashville aside, this game is winnable. Dallas seems to be reeling. Brad Richards is concussed. The Canucks need to score first and take control of this one early. The best forwards have to score...more. I think they will. Hopefully the snipers in Dallas stay ice cold. Also, let's hope Andrew Raycroft isn't able to put on a clinic against his old team. We know how he has a habit of doing that.

If the Canucks win, it will be the first time in franchise history that they sweep the Stars in a season series.

"Kill all in your path!" (LOTR never gets old).

posted by Sean Zandberg about 2 hours ago

Stars At Canucks Game Preview: Hang In There

posted by Sean Zandberg about 17 hours ago