Share All sharing options for: Your Morning Coffee- Thursday Feb 17 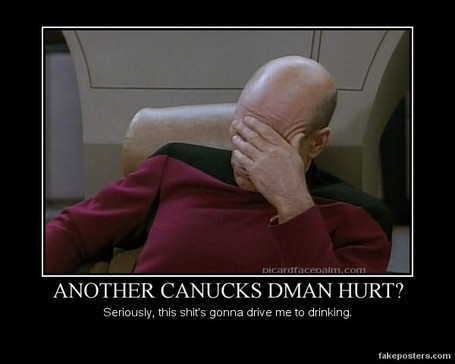 Another game, another win.  Oh, and potentially another Canucks defenseman down with an injury.  We all held our collective breaths the other night when Kevin Bieksa took a slapshot off the foot in the first period of that 4-1 win in Minnesota, but when he came back to finish the game it seemed like we dodged a bullet there.  Now it appears that may not be the case, and we should hear today about further tests after an x-ray came back negative.  I think that coach Alain Vigneault deserves some serious consideration for the Jack Adams trophy if the Canucks can hang on to the division lead.  Anyone who can take a team with that many injuries to one position and get through it the way the Canucks have this season is one hell of a coach.

So, battered and beaten these road warriors trudge into Music City to take on a Predators team that once again seems to defy logic.  People keep writing them off, yet coach Barry Trotz has his team in contention again this year.  One thing they've never been able to do however is win a playoff series, and you have to wonder if they exit in the first round again this season if they will finally make a change from Trotz, who has coached the team since it's inception.  One thing that could help them this time is the addition of Mike Fisher, who has playoff experience and seems to fit well into Nashville's systems.

And what if Bieksa is a no go tonight?  Last night Manitoba Moose coach Claude Noel had Evan Oberg a healthy scratch in preparation for a call up.  It's getting to the point now where you have to wonder if the Canucks will actually have to make a deal just to get by.  With about $1 Million in cap space, it's certainly not going to get us a lot, and that player might be shipped down to the Moose if Edler or Alberts are ready before the playoffs.  The torrid pace that the Canucks have been on since that November blowout at the hands of the Blackhawks has to slow sometime, but this team has been so good at finding ways to win, especially in getting the first goal of the game, that even with the constant rotation of players on D, you just can't count them out.

There was a bit of a panic yesterday when rumours started to fly that the Canucks were kicking the tires on Carolina D Ian White.  GM Mike Gillis went on Twitter yesterday to emphatically deny that any discussions about White had taken place.  Another Twitter rumour-monger is saying this morning that the Canucks are interested in Ottawa's Chris Neil.  I doubt this would work into the cap situation, and even so, with Keith Ballard and Dan Hamhuis both making progress in their injuries, it really may not be necessary.

A cruller with your coffee?

Cody Hodgson got a goal for the Moose last night in a 5-3 loss to the Toronto Marlies, but it was the scrap between Nazim Kadri and Sergei Shirokov that got people talking.  Quite the brutal slash Shirokov took there, but he more than acquitted himself in the fight... And it's official now, the Canucks have called up Evan Oberg tonight in case Bieksa is unable to play... The Devils, Leafs and Flames all continued to defy the naysayers as they continued their march towards the playoffs.  New Jersey's turn around has been stunning to say the least, and while they have a long way to go, it's certainly rekindled the hopes of Devils fans who had written off this season a long time ago.  The Leafs are now just 6 points back of 8th place Carolina.  The Flames shut down a team that seems to be folding down the stretch run, a 4-2 win over Dallas.  Their struggles have stirred the rumour pot that they may look to trade impending RFA Brad Richards at the deadline... The Capitals got a hat trick from Alexander Semin in a 7-6 shootout over the Ducks in Anaheim... Chicago went out and won a game for coach Joel Quenneville last night, a 3-1 win over the Minnesota Wild.  Quenneville has been hospitalized for an undisclosed 'non-cardiac' condition... The Colorado Avalanche continue to see a season that was once filled with promise crumble away, and the loss of Matt Duchene to a hand injury won't help.  The Avs took the Pittsburgh Penguins to OT last night, but came out on the short end of the 3-2 final score...

WAACH 'Cast's Band Of The Day

Continuing our musical roadtrip, this time we head to Sweden.  The other day we featured Entombed, but they're just one of many fine Swedish musical acts over the years.  From the brutal death metal of bands like Entombed and Dismember, to the more melodic but still heavy At The Gates, Dark Tranquility and The Haunted, Sweden has been one of the countries that has shaped the sound of metal.  Here's a few of my favorite Swedish acts for you: