When You Dance With The Devil, You Wait For The Song To Stop: Canucks & Wild

Share All sharing options for: When You Dance With The Devil, You Wait For The Song To Stop: Canucks & Wild 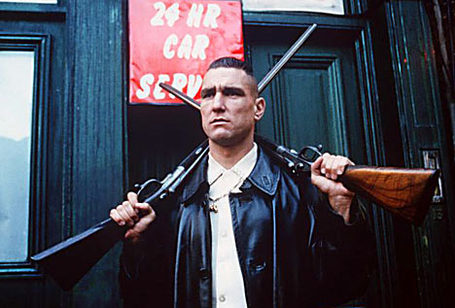 City Con: At least poke holes in the box jackass.

We've had the pleasure this season of being ranked near the top of many team statistical categories, so may as well chuck in one more: man games lost to injury. I don't believe the NHL tracks this anywhere, so if anyone has some time to kill, we'll need this list updated since it was made before Edler, Hamhuis, Ballard, Sweatt and now Alberts hit the infirmary. The fact we're losing a man almost every other game is, naturally, comical.

These injuries and fourth line holes have made it a rookie parade which continues tonight with Yann Sauve playing his first NHL game as our 12th blueliner this season. Coincidentally Sauve was paired with Sami Salo just last week with the Moose. Since the bottom pairings are going to be notably weak, Bieksa and Ehrhoff will probably flirt with 30 minutes TOI again.

If defensive injuries are our cross to bare, so be it. We've had forty years of franchise "records" to know nothing comes easy, first place or not. Our opponent magnifies this: the Wild have pretty much killed the Canucks at home. They haven't lost in the last four games from the Xcel Center, outscoring Vancouver 21-6. Insufferable prick Cal Clutterbuck actually leads the team in goals, including three in his last two games. They've won nine of their last eleven and yet still find themselves outside the top eight by a single point. Just like last night, take a guess who needs the points more?

No one is going to shed a tear for us. This next stretch of games should show us what kind of team this really is, from the top guns to the rookies and even the GM with the deadline looming and the Canucks suddenly with a wee bit of cap space. Step back from the ledge friends, nothing is fucked; hell even Torres got a point last night. Amazing!

All right, son: roll them guns up, count the money, and put your seat belt on.

A fine lesson for a night out in Minny.