It's ok to laugh in the face of adversity. I'm doing it. A bit of a nervous laugh though. If we were barely clinging to a playoff spot or the Northwest Division lead even I'd probably be putting Captain Morgan in my cereal instead of milk in the morning. The cushion right now is quite cozy with a 7 point lead on Detroit and a 15 point lead on the Flames. What better time to have your defence decimated? I think the funniest part is that now we are hoping Salo can stay healthy. Yeah, we're pinning our hopes on you, Undead! Just give us about a week or so, ok? Jeeziz, see him limping off the ice in the 3rd? I thought I was in the f*cking Twilight Zone.

The way the Canucks were getting banged around by the Blues losing a physical presence like Andrew Alberts is unfortunate. But Yann Sauve is 6'3" and 220 pounds. He doesn't score points but plays physical. The Montreal native turns 21 on February 18. The kid will have to catch a late flight to Minnesota and get 1 practice in with his new mates tomorrow morning and then jump in the fire against (well shit!) another team in the Wild who HAVE to win to keep their playoff hopes alive. The Canucks have had problems with the Wild this season. They have lost both games in Minnesota by scores of 4-0 and 6-2. Aiee! Actually they have lost their last 4 games in Minnesota, being outscored 21-6. Afraid? NAH!!! Our Canucks are full of surprises. They just gotta cool it with the penalties and play with some hustle.

-Cory Schneider will get the start. Throw the Ginger Lamb to the wolves. Good luck, kid!

-Roberto Luongo...isn't there a puck-handling school you can go to? Other than that.. 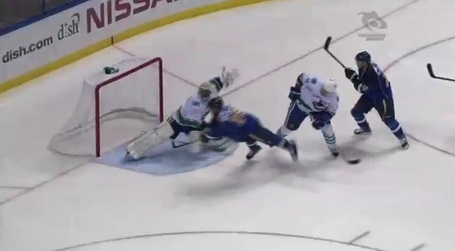 -Rough game for Chris Tanev too. But I'm not going to bag on the guy.

-The game previews will go back to their normal state next game. It's Valentine's Day, dammit. I have priorities.