Hey folks, its about time for another Nucks Misconduct meetup. Generally these are an excuse for a few Lower Mainland NM-ers to get together, drink till our motor skills are almost completely non-existent, and scream obscenities at televisions. So if you like Canucks hockey and drinking with cool people, then this meetup is the place to be. Last NM Meet-up we were treated to an exciting game, despite being a loss, vs. the Penguins and the one before that was Game 2 versus Boston, where The People's Champ Alex Motherfucking Burrows displayed his God-given talent 11 seconds into overtime. Presumably, and if my rudimentary knowledge of patterns is correct, we are due for a win! The game will be against Calgary, and fuck Calgary, so that'll be fun! Sweeter than a cold Granville Island Cypress Mountain Honey Lager on a hot summer day. Yes, sweeter than that. Anyways, the details for our group therapy session meet up are after the jump! 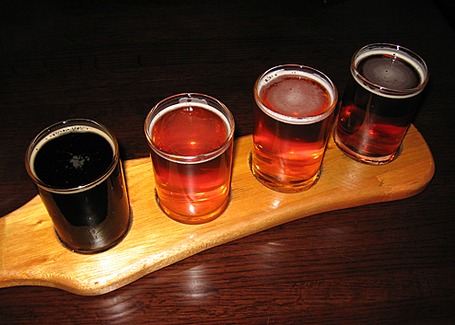 Location: St. Augustine's (presumably. I'd be open to suggestions of other places, although St. A's has an excellent beer selection). 2360 Commercial Drive, Vancouver, British Columbia, V5N 4B7, Canada. Their phone number is 604-569-1911 . For those of you who are looking at taking the Skytrain to the pub, just take the train to Commercial-Broadway Station, walk Northbound (you'll be walking 'up' towards a slight incline) and you should see St. Augustine's on your right.

Time: I'm not sure yet whether I'll have work that day, but even if I do, I should be done by 6 pm and I'll make it down there as fast as I can. Canuck_gal, JJ Canuck and Twitchy might be there early, so if I can't be there early and you think you'll be there super early, you should probably contact them and see if they'll be there early. Like before, let me know if you're going to be coming a few days prior so I can reserve a big enough table for us. And again just like before, I'll probably already be drunk by the time you get there. Puck drop is at 7 pm.

These meetups are always awesome and always tons of fun. I've watched one of my most favourite playoffs games with these folks and it was a blast. I'm pretty sure I gave JJ Canuck a bear hug when Burrows scored in OT. So if you're not doing anything that night and want to hang out with some alcoholics die hards, then come on down. If anything, come down for the useful tips on how to deal with Canucks-related angst and the chicken wings (the salt and pepper wings with parm sauce are ON ANOTHER LEVEL, MY FRIENDS). I think last time Smo suggested burying Canucks-related angst deep down and never talking about it again. The man was there in '82!