Canuck Brunch- Brother, Can You Spare A Dime?

Share All sharing options for: Canuck Brunch- Brother, Can You Spare A Dime? 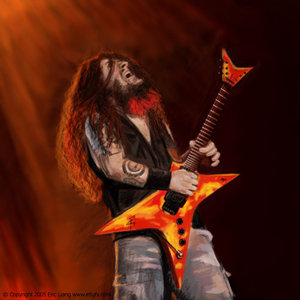 The more things change, huh? The Canucks got close to the best possible news when it came to the MRI results of David Booth's knee. Booth is expected to miss 4-6 weeks with a sprained MCL. The Canucks called up Bill Sweatt from the Chicago Wolves on an emergency basis, but with Chris Higgins still recovering (day to day, zombie bite) the Canucks are currently heading into tonight's game with the Montreal Canadiens with 11 forwards. Do the Canucks run with 7 D, or do they move Aaron Rome up to the 4th line as they did once before? Or, is this going to force Mike Gillis' hand to go out and grab someone via trade, since it seems if they were going to call up a Mike Duco or Mark Mancari, they would be in Montreal already...? We'll look at tonight's game, examine last night's plethora of cheap shots and pay tribute to a heavy metal giant who was gunned down 7 years ago today: Dimebag Darrell.

Obviously the Canucks would rather have Booth suffered a bad bruise in that knee on knee collision with Kevin Porter of the Colorado Avalanche, but considering how much damage can be done on hits like that, they did get off light. Porter has a phone hearing with Brendan Shanahan later today, and your guess is as good as mine. Almost immediately after the game there was a lot of information coming out of the Avs camp on how Booth and Porter are friends off the ice, and he's not that type of player blah, blah, blah. Here's the deal: one of the things you learn about hockey is you can still get a high sticking penalty even if you don't mean to do it. You're supposed to be in control of your stick. He may not have meant to hang out his knee and blow out Booth's leg. But he did, and clean player or not it was a dirty play and as such he has to accept whatever penalty Shanahan doles out, if he does at all.

While the Canucks have fumbled their last couple opportunities against the Canadiens, things certainly look good inspite of how banged up the boys in blue & green are. Montreal has just 3 wins in their last 10 games, and have just 4 wins of 14 on Bell Center ice. They're struggling to score goals, Carey Price is looking downright human right now, and Montreal has had their share of injuries. One thing to watch for tonight is special teams play. The Canucks power play was clicking at a 34.6 per cent rate on their last 6 road games, while the Habs haven't allowed a power play goal since October 24th, killing off 29 straight penalties.

As I am writing this the Canucks are skating at the Bell Center, and word is coming out that Andrew Alberts is skating on the 4th line with Dale Weise and Manny Malhotra. So, if you want to call in sick and start drinking now, I understand completely. Unless there's something we don't know about Andrew Alberts, this makes little sense. If this carries over to the game, get ready for a handful of penalties on the 4th line, kids. It's either gonna work really, really well or go horribly wrong. Where's the scotch? Speaking of the 4th line, tonight marks the return of Maxim Lapierre to his hometown to face his former team for the first time as a member of the Vancouver Canucks. You know it's gonna be special, you can just feel it. And with Roberto Luongo and Alexandre Burrows also having family members in the crowd, expect some Canucks noise tonight.

Another one to keep an eye open for is Habs Dman Alexei Emelin. This kid may not get the kind of media attention that PK Subban does, but a quick scan of youtube shows him laying out some punishing hits, like these ones on San Jose Sharks forward Joe Pavelski, and the Boston Bruins' David Krejci:

It's really, really hard to feel sympathy for a guy like Ottawa Senators' Chris Neil, but even he didn't deserve the kind of spear doled out by Alex Ovechkin last night during the Washington Capitals win over the Sens. Ovechkin scored a great goal last night, and some proclaimed it was a sign of a return to the Ovechkin of old. Let's hope it doesn't include the litany of cheapshots the early portion of his career is littered with... Brendan Shanahan will likely be looking at that and a few other incidents from last night. Philadelphia Flyers' Marc-Andre Bourdon nailed Buffalo's Nathan Gerbe from behind, and later in that game the Sabres' Ville Leino threw a ridiculous elbow at the Flyers' Matt Read.

While many pause and reflect on the anniversary of the murder of John Lennon on this day, the rock and roll world was shocked by another murder on the date 7 years ago. Unlike Lennon's murder by Mark David Chapman, where he was ambushed outside his NYC apartment, Abbott was gunned down on stage with his band Damageplan, along with three others: the band's head of security Jeff 'Mayhem' Thompson; Erin Halk, an employee of the club the band was playing in; and Nathan Bray, who was killed after jumping up from the audience to give Abbott and Thompson CPR. His brother, drummer Vinnie Paul watched the whole thing. The gunman, Nathan Hale was shot and killed by a Columbus police officer while still onstage. He had more than 30 rounds of ammo left. It's amazing that 7 years have passed, it still seems so fresh, and the pain so very real. Pantera was a band that will always hold a place dear in my heart. We used portions of the 'Cowboys From Hell' video in the opening credits for the music video show I used to host on Cable 10 in Kamloops back in the early 90's. I met the members of Pantera before their show at the Commodore on the 'Vulgar Display Of Power' tour, and they were among the most down-to-earth, genuine guys I ever met in the biz. Dime's skill as a guitarist was legendary, as was his fun-loving attitude. He played hard, partied hard, but never forgot the fans or the music. He was a fan, and his excitement always showed. Here's a few clips of Dime at his best, and if you wanna post some in the comments, that would be cool. If you're in Victoria, the Pantera tribute band Regular People is playing at V Lounge tonight, I highly recommend you check it out. And raise a Black Tooth Grin for Dime. Rest in Peace, Brother.