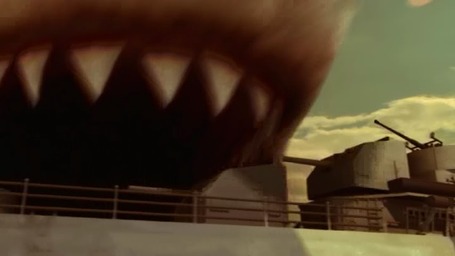 As much as they would like you to believe this is what we should be thinking heading into tonight's game, Canucks fans know different.

Yes, much like the Megalodon in that criminally underrated cinematic classic Mega Shark Vs Giant Octopus, the notion that the Sharks should instill pants-wetting fear into the Canucks is highly unbelievable. That's not to say that the Sharks aren't a good team. They still have a talented squad. They are however not nearly the formidable beast, at least when it comes down to head to head meetings with the Canucks than they used to be. It's not just the 5 game playoff thrashing the Canucks handed them, either. This team used to dominate Vancouver, no matter how good the Canucks squad was. Those days are gone, and now it's San Jose who should be concerned if they can play with the defending Western Conference Champs. It's a California road trip to round out 2011, and the Canucks are gonna rip up the Bay Area. We're also gonna take a look at the World Juniors as Team Canada is back in action today against the Czech Republic.

The Canucks made the required corrections to their game Monday night after that dismal performance against Calgary. They came out strong against the Oilers, and though the score indicated a close game, that was certainly not how the game itself played out. Had Dale Weise not been tossed for his hit on Alex Plante. The outrage in Edmonton still hasn't died down, but the lack of even a phonecall from Brendan Shanahan proved what many had said at the time of the hit: it was not illegal, but a clean, hard hit that went wrong for Plante. So, moving on...

Chris Higgins once again finds himself out of the lineup with a mystery infection, this time in his hand. It makes one wonder if Mark Recchi has been advising the Canucks medical staff on how to treat this because it keeps coming back. Mark Mancari has been called up from Chicago to take his place, a positive nod to his solid play in his first call up before Christmas. Other than that we expect to see the same lineup tonight, and that could mean another game with Roberto Luongo in net. Cory Schneider will see action on this trip, my guess is he gets the start tomorrow night in Anaheim against Bruce F'n Boudreau's Ducks.

The Sharks are coming off a bit of a letdown loss themselves, having laid out a Boxing Day stinker at home against Anaheim, falling 3-2 to the aforementioned fowl. The Sharks will be missing an important key to their lineup as Martin Havlat is on injured reserve. They will however get noted Dan Hamhuis fan Douglas Murray back tonight. One thing that will be prominent tonight as always, is a lot of slashing, hacking and cheap shots after the whistles from guys like Joe Thornton and Ryane Clowe. The question is, can these clowns Sharks play their normal physical game and stay out of the penalty box against the Canucks lethal power play? Past history suggests otherwise. I have to be honest, I am stunned to have not stumbled across a series of quotes from the Sharks that completely diss the Canucks leading up to this game as we have seen so many times before. Could it be that Joe and his pals are tired of getting their words shoved down their throats?

Meanwhile in Edmonton, Team Canada looks to go 2-0 tonight as they take on the Czech Republic. Scott Wedgewood gets the nod in goal tonight as coach Don Hay looks to give both goaltenders a match against 'quality teams' before deciding who goes the rest of the way (in theory). The Canadians suffered a big blow losing Devante Smith-Pelley to a leg fracture in the game against the Finns on Monday, and it will be a test of this team's depth to see how they manage without him, as they cannot call up someone to replace him on the roster.

The Czechs are themselves coming off a 7-0 win over Denmark yesterday, and the Canadians will no doubt look to try and hop on them early and take advantage of any fatigue issues the Czechs may have. There's going to be some line shuffling to accommodate the loss of Smith-Pelley, but overall the approach to the game should remain the same. Another key is testing goaltender Petr Mrazek, who only had to face 12 shots against the Danes. I wouldn't be surprised if he faces more than that in the first period from a pumped up Canadian squad.

Though the Western Hockey League presence on the team is small, two of the WHL'ers led the way for Team Canada in that victory over Finland. Brendan Gallagher of the Vancouver Giants had a goal and an assist and the Dub's leading scorer Mark Stone had a hat trick to kick off the tournament in style. Tonight's game goes at 4:30 PST, and kicks off a nice TSN doubleheader, as the Canucks and Sharks follow, so make sure to stay here and hang with us for another great day of hockey.

BAND OF THE DAY- KREATOR

I was scanning through my music library recently when I came across a band I hadn't listened to in a while, but wanted to make sure to revisit: Germany's thrash gods KREATOR. Along with Destruction and Sodom, they were pioneers of the German thrash metal scene, and are still going strong today. I missed them when they hit Victoria a couple years back unfortunately, but hope to see them on their next North American tour. Here's some of my favorite tunes from a band that combined wicked high-speed riffs with politically aware lyrics.