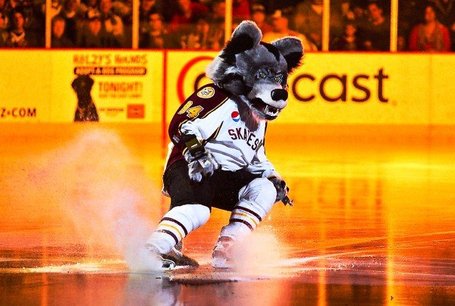 Hey folks, I know it’s been a while but after going on vacation and then coming back and having no idea what happened, I didn't feel I could put out an adequate update. I have since watched film of each game I missed and now have a better feel of what’s been going on with the team!

Rather than recap the massive amount of games that have taken place, I’ll just bring you up to speed on where the Wolves are and hand out almost-mid-season grades to the Vancouver Canuck’s prospects on the team. In my absence, the Wolves have earned points in 6 out of 8 games and now have a season record of 15-10-2-1 and have 34 points, good for 3rd in the division behind Charlotte (Carolina Affiliate) who has 37 points in 31 GP and Milwaukee (Nashville Affiliate) who has 37 points in 27 GP.

Mike Duco – Previous Grade B – New Grade B – Mike Duco is still putting in as much effort as anyone on the ice and is a very good and aggressive penalty killer. He’s at 5-5-10 with a minus 7 rating. He’s not an overly productive player, but eventually he should be able to slide in nicely to a 4th line role in the NHL.

Marc Mancari – Previous Grade B – New Grade B – Over the last several games Marc Mancari has exploded and it wound up getting him a brief call up to the Canucks. He had a bit of a slow start but is in a great rhythm now and is a big reason the wolves are on their current hot streak. Current stat line is 12-12-24 with a -8 (would be an A if it wasn't for the -8), point wise he’s good for 2nd on the wolves behind AHL standout Darren Haydar.

Victor Oreskovich – Previous Grade A – New Grade C – Battling back from injury, Victor has been a somewhat productive player, but he just doesn’t seem to want to use his size to his advantage. A much smaller Mike Duco usually comes to his rescue when shoving matches ensue. If he played with an edge and finished his checks, I think he’d easily be an NHL regular. That being said he’s got 5-5-10 through 18 games and is a plus 5.

Steve Reinprecht – B - A late arrival after the David Booth trade, Reinprecht has played in 13 games with the wolves and has scored one goal and has 8 assists with a minus 2 rating. As an NHL veteran he’s shown he has good vision on the ice, he makes some beautiful passes, and I won’t complain about 9 points in 13 games.

Anton Rodin – Previous Grade Incomplete – New Grade C – Although Rodin owns easily the most beautiful goal scored by the wolves this season, he’s yet to put together a consistent run of productive play, with a 3-6-9 mark and a minus 1 through 22 games. He shows flashes of brilliance, but I think he’ll need another season or two in the minors before he’s a viable NHL presence.

Stefan Schneider – D – As is expected, when you completely change affiliates, it takes a while to learn the team, you see a play you enjoy, look at the number, look at your program and you say hey "so and so" just made a nice play. Eventually you learn the team. Schneider is STILL a guy who makes me say "who the hell is #28" during warm-ups, and then I forget about him during the game. He has a 1-1-2 stat line and a minus 6. That’s all I know about him, sorry folks!

Jordan Schroeder – Previous Grade D – New Grade B- – I called Schroeder’s play "underwhelming" to start the, and he’s really turned that around, I’m seeing a lot of effort and speed, and he’s really seemed to enjoy playing on a line with an equally speedy Bill Sweatt. He had the overtime game winner last night, and while he’s not lighting up scoreboard with an 8-7-15, he’s improved his plus/minus to ZERO and seems to be improving as the season goes on. At this pace he’s looking at ending the season with a B grade!

Bill Sweatt – Previous Grade B – New Grade – B – Bill Sweatt played well enough to get a short call up to the Canucks this year and had me glued to the Canucks game that night hoping he’d flash his speed and knock in a pure effort goal like he’s done a few times this year at the AHL level. He’s a guy I love to watch play and I’m happy he’s part of the wolves this year, he’s got 7-7-14 so far and a plus 6.

Darren Archibald was previously on this list but has since been sent down to Kalamazoo of the ECHL, he had one goal, no assists and a minus 2 in 18 games with the wolves. Since his demotion he’s 2-4-6 in 9 games with a minus 2.

Nolan Baumgartner – Previous Grade C – New Grade C – Nolan has just been OK this season, he has a minus 6 rating, same as his frequent partner in Kevin Connauton. He’s touted as a couch on the ice, helping the offensive minded Connauton on the defensive aspects of the game, and I’m sure his plus/minus suffers a bit from that.

Kevin Connauton – Previous Grade B – New Grade C – Kevin’s offensive game has been great so far, 8-7-15 is great production from a D man, he just needs to round into his defensive game a bit more. As mentioned above he’s usually paired with Nolan Baumgartner and is a work in progress, if he develops a strong defensive presence he’ll start to see some time at the NHL level.

Sebastian Erixon – Previous Grade D – New Grade C – Despite some early season rumors that he was unhappy in Chicago and he wanted to go back and play in his native Sweden, Sebastian has been a decent defenseman for the wolves this year. He’s a 1-6-7 with a minus one rating. Really not a whole lot to say about him, he’s just a solid player who seems to be improving are the season progresses.

Dustin Friesen – Previous Grade D – New Grade B – Dustin isn’t a sexy player but through 16 games he’s 1-1-2 with a Plus 6, and a plus 6 is best among Canucks prospects on the wolves (Wolves’ contract Mark Matheson is plus 8). Dustin never does anything overly bad or overly good, just a nice player getting the job done; look forward to seeing more of him this year.

Ryan Parent – Previous Grade Incomplete – New Grade – C – Ryan is currently playing some Spengler Cup hockey across the pond, but in his 12 games with the wolves this year he’s been a solid player with a plus 3 and a 1-1-2 stat line. 12 games is a bit of a small sample size so it’ll be nice after the Spengler cup is over to see how he does over the course of a season.

Adam Polasek – Previous Grade B – New Grade – C – Yet another Canucks D prospect who’s playing well, but not a shut down guy. His positioning is good and he’s got a plus 1 rating so far this year with a 1-2-3 stat line.

Chris Tanev – Previous Grade Incomplete – New grade – B – Chris Tanev leads Wolves D-men with 8 assists in only 16 games played with a plus 2 rating. He’s clearly the best D-man on the roster and should be on an NHL team next year.

Matt Climie – Previous Grade B – New Grade B – Matt Climie has been great for the wolves this season, he’s played in 13 games and gone 8-4 with a 2.63 GAA and a 0.926 SV%. There was a time where I thought he was going to take over as the #1 goalie overall, but he had come back down to earth a bit and he’s currently on the shelf with an injury. I’m hearing it’s not long term, but it would be easier for me to record a platinum record than to get good AHL injury information.

Eddie Lack – Previous Grade B – New Grade B – Eddie Lack has used the above mentioned injury to try to put to rest any notion of him becoming the 1A goalie on this team. He’s been playing great lately and is a big reason why the wolves are on their latest surge. He’s still winless in shootouts this year, but as Roberto Luongo’s poetry has shown me, some goalies just weren’t meant to be good at them. In 18 GP this year Eddie is 7-7 with one shutout, a 2.47 GAA and 0.920 SV%.

And that’s it for the almost- midseason grades. The more I’ve been learning about this team, I just have to say I’ve really enjoyed the affiliation with Vancouver. With Atlanta, you could imagine that the talent pool wasn’t quite as good and we were crippled with callus but this Wolves team has a nice amount of depth and since their slow start they’ve been one of the better teams in the AHL. If the season ended today they’d be in the playoffs and I think with their depth they’ll be able to make a nice run this post season.

Coming up next – The Wolves play at Milwaukee Wednesday night, Home against Rockford on Thursday and home against Charlotte on Saturday. These are three important divisional games.