Share All sharing options for: Tuesday's Numbers: The Canucks' recent run is unsustainable

In the last four games, despite the 3-1 record, Vancouver's actually played pretty mediocre according to score-tied, even strength metrics. Part of that is that they've given so little time for their opponents to settle in, and have taken an early lead in every game they've played in that streak despite the horrible appearance against Calgary a few nights ago.

After the jump, I'm going to use charts and graphs and stuff to show what's been happening to the Canucks lately, but for a bit broader context than the last four, the Canucks have been dynamite ever since their annual "being blown out by Chicago" game. I'm sure we can say that that game sparked the Canucks somehow, but the difference is pretty minute. The Canucks have had some outstanding shooting luck since the Chicago game, shooting an uncanny 9.1% with the score tied and 11% overall at even strength.

So, hate to break it to you all, but this run probably won't last.

Let's just take a brief look at the Canucks' underlying numbers since the Chicago game:

Nothing like getting a big spike in each percentage category to make it appear like you've been doing better. The goaltending went from being a farce to being an absolute rock. (FWIW, for the full season, the Canucks are a 56.3% Corsi Tied team with a 101.4% PDO, a pretty good average).

So, judging the Canucks based on all the games since Chicago, while they've been playing better, it's also completely unsustainable. But the way the Canucks have played all season is probably the best indicator of how they'll continue to play, since it's not only a larger sample, but the PDO is also as close to 100 as the Canucks have ever been.

My favourite toy, here's how the Canucks have fared over the season if you take their cumulative shot rates and PDO, stretched across a graph: 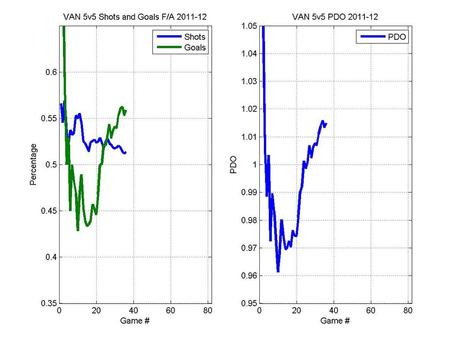 The declining shot rate is due to score effects more than anything else. I'm hoping the next version of this graph will have a cumulative score-tied rate so that the Canucks' play can be visualized. And so can their percentages. They haven't really hit any truly unlucky games lately,

Anyways, the Canucks have scored 120 goals and allowed 88. According to Pythagorean Expectation, they should have a win total of 23.4, compared to their actual total of 22. This means that Vancouver is likely to start winning closer games; they just haven't played in enough lately to really allow that regression to set in, but it will happen, probably when the Canucks percentages start to slow.

This is reflected partly in Copper n Blue's Clear Victory Standings, found on the right side of the page near the bottom, which charts the amount of games won or lost by two-or-more goals, not counting empty netters. The 15-5 Canucks haven't seen a clear loss since the game against Chicago, so hopefully the team doesn't get too used to its success, or assuming that everything will go in from here on out.

I think the Canucks will start playing in some closer games over the next while, but I doubt that the team's success lately has been completely hollow. They're getting great possession numbers, but the play of Cory Schneider and Roberto Luongo is getting to be unsustainable and it will hit a bit of a speed bump. The other thing is that the Canucks are scoring from everywhere (against a lot of bad goalies, mostly) and that's something that won't last. We know it won't, because we see teams hit pockets of bad shooting all the time (the Canucks could very well finish the season with a PDO of below 100) because of some awful luck around the net.

Like, really, with an 11% shooting, that would make for some awful goaltending at the other end. .890 at even strength? That's territory reserved for Steve Mason, Alex Auld, Martin Brodeur and Dwayne Roloson.

Anyway, while we wait for the regression fairies to pick us up and set us back into reality, there's a lot to do in the meantime. The NBA season has just started up, the World Juniors are on, and the NFL is in full playoff-hunt mode, with BCS bowl season right around the corner. This is a good time of the year to be a sports fan.