Last night was a great example of the complete Canucks package: speed, skill, physicality, tight checking, outstanding goaltending, and if you ask Damien Cox, borderline dirty plays. It was all on display in what was probably the most entertaining game of the year thus far. The top 3 lines each scored, the D added one, and Luongo was fantastic. After watching that game, I think I'd rather see a playoff series against the Wings this Spring than another re-match against Chicago.

Onward, ho! News and notes from the team and around the NHL coming up.

A very interesting take on the Canucks/Wings game last night, from the other side. [Kuklas Korner] An excerpt:

"Well, the game would have been much closer if the Wings who dominated play over the last 10 minutes of the 3rd period and showed flashes of tremendous brilliance in the second had not waited so very long to do anything other than have the other team's will will thrust upon them as they committed mistake after mistake and plain old cheated themselves out of a game they should have at least had a chance to win, had they chosen to not be so flattered by their opponents' smile that they ignored a very obvious pair of fangs." 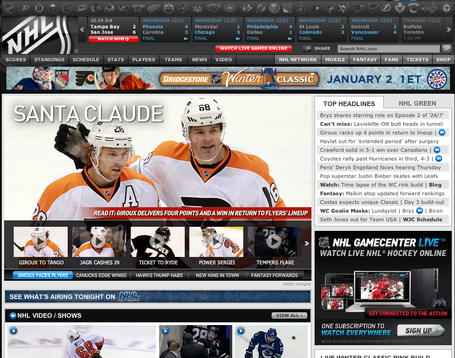