Canuck Brunch- No, Thank YOU

Share All sharing options for: Canuck Brunch- No, Thank YOU

onthewings Matt Saler
Let's hold off the "almost equals" talk until Vancouver can boast a consecutive playoff appearances number a bit higher than 3, shall we? 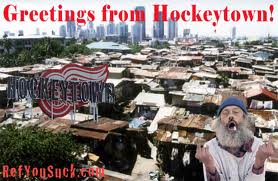 There you have it, folks. It's an honour AND a privilege to be able to play against the Detroit Red Wings. I mean, this team is so good, they've never stumbled in their utter domination of the league, right? It's good that the Red Wings and their amazingly loyal fans are there to keep us from getting uppity. I do hope they forgive us for forgetting our place. And thanks as well to all of you for remembering to point out that there was a riot after the Canucks lost Game 7 of the Stanley Cup Finals. Such embarrassing foibles of the host city should always be pointed out. Enough of our shortcomings however, the Canucks still have a hockey game to lose, right? After completely dismantling the Western Conference's biggest surprise (read: pretenders) 4-0 Monday night, the Canucks move on to a stiff challenge against one of our betters, in spite of what silly things like standings and statistics say as Detroit rolls into town.

Now that I've scraped that Detroit arrogance off the bottom of my shoe, we can look at tonight's matchup. All kidding aside, Detroit is one of the franchises that I can respect because they do a lot of things right. If Mike Gillis turns out to be half the GM Ken Holland is, we will be very fortunate indeed. I hate the Wings, but that hate is borne of respect for their ability and a little bit of jealousy at their success.

No matter what they want you to believe these are two really evenly matched teams, with high-powered offense and great goaltending. Not sure why they're acting like this, aren't we supposed to be the fan base with the inferiority complex? If there's something that jumps out at me about the Red Wings so far, it's their road record. The Wings are an absolutely average 8-8-0 on the road so far this season, a far cry from the fearsome Red Machine of past years. There's not a lot of weakness in their game though. They get scoring from all their lines, and have a usually solid defensive approach to the game. One key to the Canucks' chances of victory tonight is going to be special teams.

The Red Wings surprisingly enough are struggling with their penalty killing this season, currently at 81.2% the Wings could have their hands full with a Canucks power play that currently sits at the top of the NHL at 25.9% on home ice and 26.1% overall. Utilizing their speed to draw penalties against the Wings will be a big factor in pulling out a win tonight. How good is the Canucks PP this season? The Wings are ranked 4th at 21.2%. The 2nd ranked team? Toronto. At 21.4%.

Poor Jimmy Howard has managed to keep from completely breaking down despite not being on the All Star Game ballot this season, something that drew the ire of many Red Wings fans. While the histrionics may be a tad much, it is baffling that he was left off even if you consider it's what they did last season (for the most part) that gets names on the ballot. Howard leads the NHL in wins, a) because he is a great goaltender, and b) because he plays so often Mikka Kiprusoff calls to tell him he plays too much. Detroit's backup Ty Conklin last start was in October. As good as this team is, you get the feeling Wings fans collectively hold their breath each time Howard takes a bump.

As I write this we still haven't had confirmation if Keith Ballard (flinch-related back spasms) and Andrew Ebbett (foot) are ready to go. If not, the lineup will be the same as Monday night, which saw a surprisingly solid performance from the defensive pairing of Andrew Alberts and Alexander Sulzer. The 4th line of Dale Wiese, Mark Mancari and Maxim Lapierre were pretty decent, with the most physical game from Weiss this season. The game is on TSN tonight, meaning we get to enjoy Chris Cuthbert and Ray Ferraro, and there's zero chance someone like Marty McSorley or Damian Cox will say something during the intermission that will make us want to hit ourselves in the head with a hammer.

A huge thanks to the Pittsburgh Penguins and Calgary Flames last night, for taking care of the Chicago Blackhawks and Minnesota Wild in regulation last night. The Minnesota Wild are now winless in 5 and have officially begun to play the 'I' card. Yes, the banged-up Wild are banged-up, and that's why they're losing, not because they were, as noted idiot Daniel Carcillo said 'playing out of their shoes'. Last year's Canucks team would feel sorry for the Wild if they could stop laughing about it. Use half as many players as the Canucks did last season and still win the President's Trophy, then come complain about your injuries... Ottawa woke up this morning in 8th place after a 4-1 win over the Buffalo Sabres, and that sees the Sens and Maple Leafs in a playoff spot at the same time for the first time in forever. The NHL's all concussion team suffers a big loss as Claude Giroux looks ready to return to the Philadelphia Flyers lineup tonight... Montreal is still looking for their 1st win under new coach Randy Cunneyworth, and the task won't be easy as they take on a ticked off Chicago Blackhawks squad tonight. The Hawks mounted a comeback against the Penguins after falling behind 3-0, but couldn't get the even up goal in a wild third period. How do we know they're ticked off? Captain Jonathan Toews no-commented reporters following the game. We're not laughing, we just have a tickle in our throats, honest...

BAND OF THE DAY- MINISTRY

Taking a hint from Zandberg in the pregame thread, today we look at the kings of industrial metal, Ministry. Though their early works were much more akin to a creepy fucked-up Depeche Mode, the band gravitated towards more metallic leanings with each release. Though calling it a day a couple years ago, mainman Al Jourgensen and his mates are back in the studio recording, Relapse is due out in stores March 3, 2012. Here's a look at a band whose history of drugs, mayhem, death and debauchery rivals anything in their lyrics.