What A Great Matchup - Canucks vs Red Wings Gamethread

Share All sharing options for: What A Great Matchup - Canucks vs Red Wings Gamethread 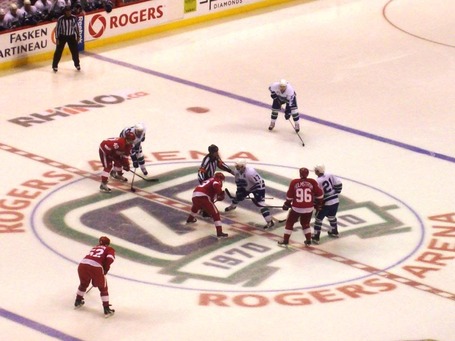 7:00 pm PST, TSN
Enemy territory: Winging It In Motown
Enemy pro: Won't it be nice to no longer be in their conference?
Enemy con: Gonna miss these excellent matchups though...

The picture is one from the game I went to last year, the November 6th 2010 matchup where the Red Wings visited the Canucks. It was an awesome game to see live. My precious Alexander Edler scored the gamewinning goal, while Manny Malhotra stole the puck from Pavel Datsyuk and scored a shortie. Geez, looking through those highlights, Manny and Edler were both beast-mode in that game. Twas a great game for my first. (If you want to see more of my photos, check here.)
Anyways, Detroit is back in Vancouver for their first of 2 visits to Rogers Arena this year (the next one is in February). Despite getting on in years, this Wings squad is still among the elite teams in the league. So, let's have some more fun with this matchup while we still can.