Who gives a f*@%, just be ready- Canucks vs Wild GameThread

Share All sharing options for: Who gives a f*@%, just be ready- Canucks vs Wild GameThread 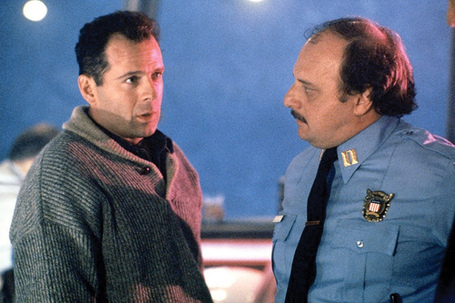 In a hockey themed remake, the role of John McClane will be played by Ryan Kesler. Cal Clutterbuck and his mustache will portray Carmine, the fat-assed airport cop.

Not much else needs to be said, right? Enemy target identified. Time to bring the Wild back down to earth John McClane-style, amiright?

In case you missed it, Aaron Rome is out 3-4 weeks while he fools non-believers into thinking he isn't actually infallible, and Keith Ballard is out for tonight with back spasms, probably due to flinching in his sleep, dreaming AV was punching him again. Andrew Alberts and Alexander Sulzer will be in their place. The first game of a 4 game homestand, here's hoping Roberto Luongo and the boys remind the Wild just who this division belongs to. Tonight's game thread is brought to you by one of the BEST Christmas movies of all time: Die Hard 2: Die Harder. Here's the movie in a handy, 3:14 version, Coconuts GO!