Share All sharing options for: Talk About Us, Grapes! - Canucks @ Senators Gamethread 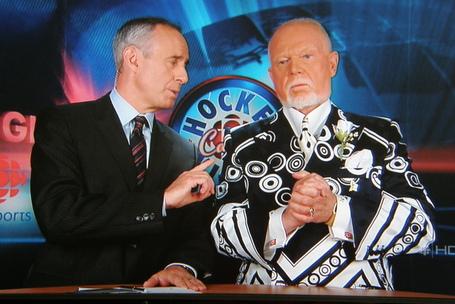 Okay, I'll admit, I was off the mark for doubting the Canucks scoring any goals against the Canadiens the other night. My bad, I was just going off results of previous trips through Eastern Canada. Let's face it: that Bell Centre is nasty. Anyways, Vancouver visits Ottawa tonight, for the last of 2 meetups this year with the Senators. And since it's the early game on CBC (we got national over the Jets - Red Wings game), we're guaranteed to have Don Cherry talk about us for once. You guys will have to recap it for me, since I'll be just finishing my econometrics final exam at that time.