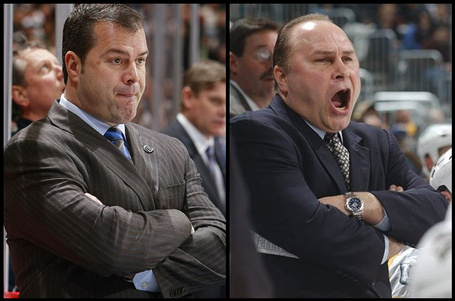 With all the coach firings happening right now, it's shocking that Vigneault, who we grabbed from the Moose in 2006, is now 4th in NHL coaching seniority among the 30 teams (list hasn't been updated yet). Seriously, amidst all the "FIRE AV" shenanigans over the years, he's still here and planning to stick for a while. Meanwhile, the Canucks host the Predators tonight, and Nashville is home to Barry Trotz. Their infamous coach has the 2nd longest tenure among NHL coaches right now (Lindy Ruff of the Sabres has 16 days on him), having been their head coach since the team was created in 1997. That's ridiculous, especially considering that both coaches were runners-up for the Jack Adams back in June.
On another note, tonight is the highly-anticipated return of Mason Raymond. Keep in mind that, exactly a year ago, Mason scored his 2nd consecutive hat trick at the Saddledome. Isn't it nice when everything lines up perfectly like that? supposed to be MayRay's return, but a paperwork hiccup ruined that. Aaron Volpatti slots back into the lineup. Oh well, we'll get to see him return when we visit Calgary on Sunday. Just think of our last few visits to the Flames home....