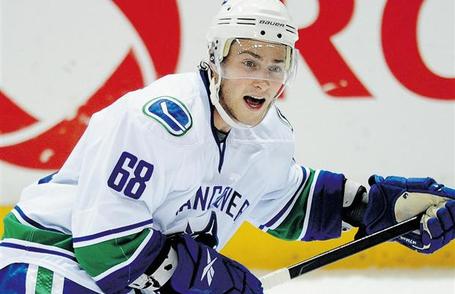 This week the Chicago Wolves played two away games in Peoria against the Rivermen, the affiliate of the St Louis Blues. They managed to split the two games, dropping Thursday night's matchup 3-2 and then coming back to win on Friday night 2-1. As you can see, the Wolves have been able to maintain their "wonderful" 2 goals per game average, and it seems like if we give up 2 or more goals in regulation, things aren't going to end well.  They currently sit at 4th place in their division with 10pts (4-5-0-2)

The offense may be able to get some help from veteran Steve Reinprecht. Reinprecht SHOULD be playing sometime in the near future, he hasnt played since the trade because he was in the process of moving his family up to Chicago, and all we found out about him in the past week is that he'll be wearing #29.His NHL experience on the team will hopefully add some direction to the offense.

If I had to pick a goaltender of the week award, it would have to go to Matt Climie who not only stopped 29/30 shots faced, but also assisted on a goal by Anton Rodin.  His season stats are 2.02 GAA and 0.947 Save %. Eddie Lack was just OK on Thursday, and his defense did him no favors. Lack allowed 3 goals on 23 shots and was beat badly on a breakaway (evidently breakaways/shootouts are still a weakness). Lack's season stats right now are 2.42 GAA and a 0.927 Save %.

Player of the week - Nathan Longpre - Current research shows he was at Canucks camp this year, but is now ultimately on a professional try out with the Chicago Wolves. Longpre has really started to play well the last few games. He has scored two goals in his 4 games and almost netted the tying goal in the final seconds of the loss to Peoria on Thursday. Nathan has the look of what could be a nice offensive spark as he gets more comfortable in the AHL, and could hopefully earn a Canucks contract.

Coming up is a Tuesday morning game at Hamilton at 9AM, in front of "125 school buses filled with children". Last year in the Wolves school game, there were numerous fights and quite a few angry emails from mothers who believe their children would be scarred for life seeing a few hockey fights, I can only hope for the same this time!

Final Notes - Schroeder and Rodin both scored this week so we'll look for them to keep up the production, any offense would help at this point.

I don’t have a timeline of Tanev and Parent’s returns but when they do come back from injury this team will be absolutely loaded on defense and that will definitely help us get some more wins, especially if we're only going to be able to score twice a game.

Follow me on twitter @ggooglyboogly for more timely updates on the wolves and to let me know more about prospects you want to hear about. I'll also be checking out the Canucks ECHL affiliate, the Kalamazoo Wings games when they're in town to play the Chicago Express (Columbus ECHL Affiliate).