Hockey nicknames are a rite of passage for any player. In fact, it doesn't even have to be hockey, in any sport, really, you will get a nickname. Some claim it’s because it allows you to call out to the player on the ice quicker. Screaming "Mark Lee knows where you live Ryan Nugent-Hopkins !" takes longer than "NUGE! Run!" Or if you remember the Olympics, Crosby screamed out the infamous "IGGY" when calling for the puck from Iginla. In other cases, names simply get chosen because they have a funny back story.

Todd Warriner, a former Canuck, had the nickname of "One Touch", though why he has this moniker remains a mystery to this day. Willie Mitchell was often called "Bill Pickle" due to his habit of eating dill chips. As we all know, Bieksa goes by the name "Juice" because he loves pineapple juice and drinks endless amounts of it. Jim Sandlak was called "The House" in honor of the fact he was a big player, and also because he could eat a lot of food. Wellwood amounts of food. Nicknames can also reach across borders, too, as Sami Salo has a nickname of "Valkoinen Viikinki" which roughly translates into "White Viking." This might be the best nickname of all time, let’s not lie.

Then there are the nicknames we never hear about, the ones that never make it out of the locker room. For instance, I have it on good authority that Mark Messier still gets called WOTSS ("Wash Off The Stripper Sweat") to this day by some former team mates.

Nonetheless, nicknames can vary depending on the situation of the player, but in all cases, the nickname has to be granted, it can never be taken. If you think calling yourself "Superman" is the coolest thing ever but a team mate calls you "Snorts", well I’m sorry, but you’re stuck with "Snorts". One of the most common ways a player will hand out a nickname will be by combining the first two letters of your first name, and the first two letters of your last name. So Alexander Molgilny became "Almo" during his career. Aside from being deathly close to sounding like "Elmo" it’s not a bad nickname. Other ingenious ways of making a nickname include adding an "ie" or "y" sound to the players last or first name. So Doug Gilmour could easily be called "Dougie". Dougie also had another nickname, however, and that one was "Killer" due to the fact his team mate Brian Sutter thought Dougie looked like infamous serial killer Charles Manson.

Which brings us back to Kevin Bieksa. Kevin Bieksa has a black belt in nick names, and as a result he is often the one handing out locker room titles. And Kevin has strict rules when it comes to this. As Kevin himself once said,

"If you give a nickname it's got to be something all the guys are going to laugh at," explains defenceman Kevin Bieksa, "otherwise you're just embarrassing yourself. If somebody gives a guy a bad name, they're going to hear about it."

(Half of the nickname background I allude to came from this Canucks.com article: http://canucks.nhl.com/club/news.htm?id=451839 . I highly suggest giving it a read, it’s a great article.)

So while there will always be a lot of "Kaner" and "Duncs" type nicknames out there, the truly good ones are the names that have a story and make the players laugh. Which is what Kevin appears to be trying to do for one David Booth.

In an Elliott Pap article from earlier this week, (http://www.vancouversun.com/sports/Cherry+doesn+impress+Canucks/5636784/story.html) we find out that David Booth doesn’t really have a fun nickname yet. He has traditionally been called "Bootsy", "Booter" or "Boothy" or some variation of that. Well, Kevin Bieksa has decided to put his foot down, as he has now deemed David Booth to have the nickname of "Grizz". Why you ask? Well because David Booth is an avid hunter, so the idea that David Booth fights bears in his off-time is a source of merriment for his team mates. Now I know there are animal lovers out there who will dislike the idea behind this nickname. But look at it this way, David Booth hates this nickname. So if you don’t agree with it, at least you’ll know you’re making David Booth sad every time you call him Grizz.

So I propose to the Canuck Nation, let us help Kevin Bieksa on his quest to make this nickname stick. Whenever you have discussion about David Booth, simply call him "Grizz". It won’t take up much of your time, it won’t take up much effort. Just go ahead and call him Grizz whenever you can. "Nice goal, Grizz!" you can shout at the game. "What a god awful play that was, Grizz" you can snort with derision when he makes a mistake. It doesn’t take much. And in doing so, you’ll know that you are part of something bigger here. We are helping Kevin Bieksa torment a team mate. And really, is there anything better in sports than hearing about a team mate getting chirped?

If you need any other reason to call David Booth "Grizz", if you still struggle to embrace this quest, let me leave you with one final thought. The last famous "Grizz" in Vancouver was this guy: 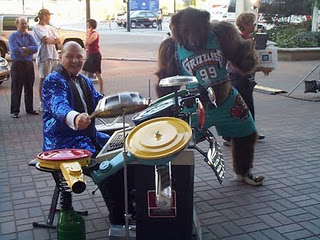 Is that the memory we want of the name "Grizz" in this town? Of a bear dancing for money while stealing the number of the Gretzky? Didn't David Booth un-retire the number 7 from the fans? Shouldn't he help us out and un-retire the name Grizz as well? So join me fellow Canuck fans and help me welcome David "Grizz" Booth into this world. 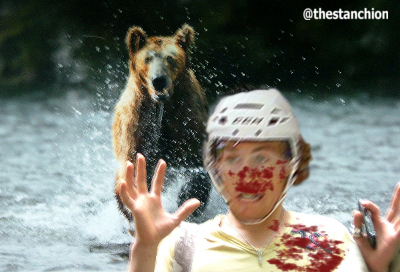