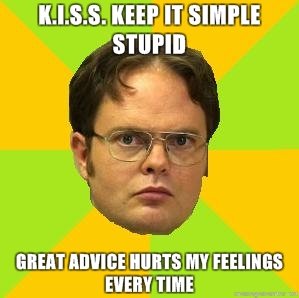 I could spend this entire post dissecting the abomination coughed up by the boys in blue & green last night.  But I won't.  Seems like we have one of these games a year, where for some reason we roll into Minnesota and take the night off.  At least we got it out of the way early.  All that's left now is to get an email off to karma and find out just what the hell is the hold up re: Cal Clutterbuck.  Enough about that.  The best thing to do is just shake it off and re-focus on a game that gives the Canucks an opportunity to really show what they're made of.  Not just bounce back from an embarrassing loss, but get some revenge on a team that kicked their asses a few games back.

Trying to figure out why this team offers up garbage games like this will drive you mad if you let it.  It's probably the most frustrating part of being a Canucks fan.  The coaches can't figure it out.  The media can't, and the fans can't either.  Either way, it's maddening.  So let's put it aside and focus on tonight.  Oh good, another team we struggle to play good, complete games against.

Since that 4 game sweep nearly 3 years ago, the St. Louis Blues have really had it in for the Canucks.  No matter how good the team has been playing, it almost seemed like the Blues could just put the two points on the standings before the game began.  The misconception that the Blues should be one of those slam-dunk 2 pointers is a mistake for any team, and definitely for this one.  They have some decent goaltending, including a backup in Brian Elliott who doesn't seem to want to lose right now.  Tough D, some speedy young forwards and one in particular who is Sedin-like in his ability to score at will against Vancouver in Alex Steen.

What has to happen for the Canucks to reverse the trend against the Blues?  Well for starters, getting back to basics and a 60 minute effort is a great place to start.  And unlike last night, actually taking advantage of any momentum via scoring first?  Always a good thing.  Defence?  It seems like such a foreign concept after last night, but why not?  Quite frankly if this team shows the effort and hustle we saw in Calgary Tuesday, hell even half of it, they have a pretty good shot. And finally, the goaltending.  Roberto Luongo needs to build off these last two wins and another one tonight will send a message as they head into a huge game in Chicago Sunday.

BAND OF THE DAY- GWAR

Yesterday's band of the day was one that had a scare but came out alright after surviving a plane crash, but today's band of the day is here because of the tragedy they've suffered yesterday.  Cory Smoot, guitarist for GWAR was found dead on their tour bus as the band prepared to enter Canada for shows in Edmonton, Calgary and Vancouver.  Smoot, the lastest and longest serving to play the character Flattus Maximus was 33.  No cause of death has been revealed, but the band is continuing on to play these shows, to help their fans deal with the grieving process.  Leader Dave Brockie (aka Oderus Urungus) today announced that in honour of smoot, they will retire the Flattus Maximus character.  RIP.