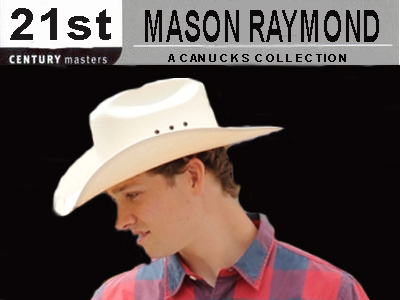 This will be the Game Preview Post. You can put your predictions in the comments section. With MayRay playing for sure against the Preds, I can finally publish this post. It has been in draft for over a week and took a long time to put together.

Mason Raymond. A rock star of sorts. The ladies gasp at this looks. His boyish charm. He can dazzle with his talent and blazing speed. He is a workhorse. He is gritty despite his smaller stature. Ballsy. Even so, he struggled last season after a 25-goal, 53 point performance in 82 games 2 seasons ago. We have not seen MayRay since Game 6 of the Stanley Cup Finals after he was piledriven into the boards by Johnny Boychuk, suffering a broken vertebrae. Now, the gritty speedster is ready to return to the Canucks' lineup and you know what? I am excited about it. Raymond has a lot

to prove. He needs to prove that 2009-10 was not a one-time monster performance in a contract year. I am excited about his potential addition to the Ryan Kesler-Booth/Higgins line. Even more motivation for David Booth to earn top 6 minutes....I think Raymond will force him to challenge for that spot or vice versa. More healthy internal competition works for me.

But before the streaky one returns I want to provide a Mason Raymond Top 10 goals scored in a Canucks uniform video list. You know, just to build some hype. Ready? GO!

10. January 2011: I don't like putting shootout goals on a list, but when you do a spinaroonie...well...I'll make an exception: