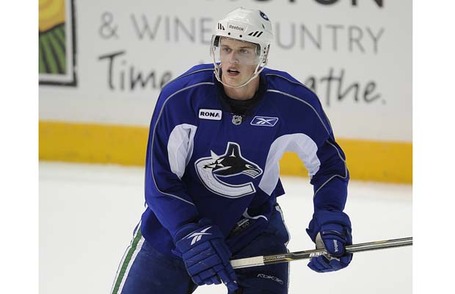 Aside from Sunday night’s shutout loss - the team’s first in 52 games - the Chicago Wolves played another solid week of hockey, winning on the road in Texas against the Stars and the first of two back to back games against the Peoria Rivermen at the Allstate Arena.

The game in Texas started off well for the Wolves as they jumped out to a 2-0 lead within the first four minutes of play with Adam Polasek and Antoine Roussel both scoring their first goals of the season.  Connauton potted the eventual game winner in the 2nd . Matt Climie held strong for the Wolves and they won 3-2.

Saturday night the Peoria Rivermen came to town for a two games in two days series, it was also the debut for Steve Reinprecht, who after a long injury and moving delay was finally able to take the ice.  Reinprecht had two beautiful assists on the powerplay and could really kickstart this offense with passes like that. Jordan Schroeder showed off some impressive speed in this game, scoring two goals as the Wolves handled the Rivermen 5-3.  Despite giving up three goals, Eddie Lack looked solid in net stopping 21 out of 24 shots and keeping the high powered Peoria offense at bay.

"@billysweatt - Just a bad game for us tonight. And the bears lost too. #brutal"  That tweet from Wolves’ player Billy Sweatt pretty much sums up the game on Sunday.  The Wolves came out flat for this game.  Matt Climie looked less like a brick wall in this game stopping 27 out of 31.  I thought this game was going to go in the other direction as Peoria was playing the final game of a three in three, but this just wasn’t the Wolves’ night, losing 4-0 and hopefully we won’t see another one like this for a while.

Player of the week – Kevin Connauton – No one really shined this week (a lot of solid efforts all around), but Kevin had 3 points in the three games last week and currently has a stat line of 6-5-11 with a -5 rating.  He continually shows that he’s willing to jump into the play offensively and has been a very productive player.  He’s typically paired with Wolves captain Nolan Baumgartner which should help to hone his defensive skills.

Coming up next – The wolves have a three in three of their own this week starting with the red hot (no pun intended) Abbotsford Heat team on Friday night, a quick trip out to Grand Rapids Saturday and the Heat again at home on Sunday.