Share All sharing options for: Canuck Brunch- Rocket Science 'n All That- November 29 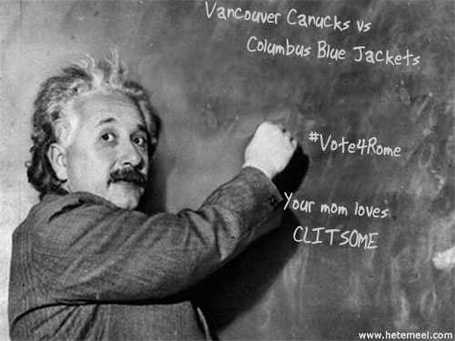 It just won't go away.  Some are thrilled that Alain Vigneault has given Cory Schneider his 6th straight start for the Canucks tonight as they take on the Columbus Blue Jackets.  And with how well he's been playing, who wouldn't be?  But if you think this is an indictment of Roberto Luongo's play, you need to stop it.  You're gonna blow a frontal lobe or something.  This isn't a situation of a goalie losing his spot.  The Canucks have 2 #1 goalies.  That's it, that's all.  As if they needed another reason to hate us, just wait til both goalies start rattling off wins the way they have in November.  Kind of ironic that they play another team with goaltending issues, this one however is a very real controversy.  Former Canucks backup Curtis Sanford has been outstanding for the BJ's, leaving many to question if Steve Mason's lost his starting job for good.

Yeah, it's wearing on me.  The amount of thought and energy being wasted on this ridiculous goalie 'controversy' is staggering to say the least.  If outsiders want to babble on about it, so be it.  I kind of dig how much time they spend talking about the Canucks these days, Embrace The Hate and all that.  It's the infighting that goes on in our circle that is the frustrating part.  Prefer one goalie to the other?  Fine.  But the lengths to which some of these Canucks 'fans' are going to bashing Luongo?  Sorry, but his numbers just don't bear it out.  I don't honestly think anything that myself or any other blogger or journalist says about this will make a difference to people whose primary line is "Luongo lost us the Cup!!!1!"  I accept that line of reasoning only by admitting he didn't score enough goals, like the rest of his teammates.  Seriously, it's time to move on.

Schneider will start tonight, and even with a win, we could very well see Roberto Luongo in net Thursday when the Canucks host the Nashville Predators.  And you know what?  I'm good either way.  It's because I cheer for the Canucks.  I don't hate our goalies.  There are so many teams that would kill for our position.  Keep your us vs. the other us garbage and let us know when you're done high school, m'kay?

Alexandre Burrows took the morning skate, an indication that he's likely to play tonight, a good thing with how the team as unit has been playing.  Cue the other controversy.  Mason Raymond is ready to return to the lineup, but with the team playing so well, why mess with the chemistry?  And that being said, there's no rush to get him in.  Putting him on the 4th line makes zero sense, the Canucks 4th liners have played well in their role, and a 4th liner Mason Raymond is not.  Best to keep him practicing to get back into game shape so that if and when they make a decision about sitting someone, he will be ready to step in.  Once again, a good situation to be in.

Speaking of returns, after missing the last half of the San Jose game, Alex Edler is ready to go for tonight.  Aaron Rome meanwhile is also ready to go, but the same issue with Raymond, everyone's playing so well right now that they're not going to sit them to allow the future Hall of Famer* into the lineup.  Depth.  It's what's gonna get them back to another shot at the Cup, people.  So that means Andrew Alberts, he of the game winning goal from the last game is going to get another chance to play his way into the press box.  Or not.  And speaking of D men, when all the outside naysayers chided the Canucks for letting Christian Ehrhoff shuffle off to Buffalo, saying there was no one on the Canucks' D that could replace the Hoff's offensive output.  I think you should all take a little time to point and laugh at them when you show them that Dan Hamhuis (2-9-11) is tied for 2nd in team scoring in November. 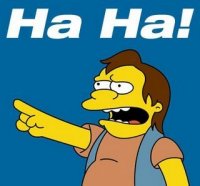 So that was a fairly eventful Monday, no?  From waking up to discover 2 coaches fired (I like to picture Bruce Boudreau on the phone, egg on his face going "I'm what...?  Are you fucking shitting me?!") in Washington and Carolina, to a 3 game suspension for Montreal's Max Pacioretty and a $2500 fine for Pittsburgh's James Neal.  No issue with the MaxPac suspension, though the smug self-righteousness coming from Boston fans and writers was nauseating.  Really, is it possible for you guys to not be dicks even once?  As far as Neal I get the fine, but not punishing PK Subban's slewfoot on that play is absolutely brutal.  Speaking of brutal, what was worse last night: the 5 minute major assessed to Edmonton's Ryan Jones, or the dive by repeat offender Jordan Tootoo of Nashville?  I could accept a 2 minute penalty, but that was just a normal hit, a little high perhaps, but just one of those unfortunate ones where unfortunately Blake Geoffrion was injured.  Tootoo?  An absolute disgrace, and that's coming from a team with a reputation for having some players that embellish calls.  Helping a call is one thing.  The kind of flopping that he, and for that matter Washington's Alex Semin do, are a detriment to the league and need to be fined and or suspended if they continue.  Yeah I said it...

*If you think Romer's really gonna make the Hall of Fame, please contact me about a fantastic investment opportunity...

BAND OF THE DAY- PISSING RAZORS

One of the most obvious Pantera-inspired offspring, this El-Paso based band never got a lot of credit, but I always dug their take on groove-laden metal.  The band broke up in 2004, but left behind a few gems that hold up not too badly compared to a lot of other metal from that timeframe.