Share All sharing options for: Canuck Brunch- Heads up...- November 26 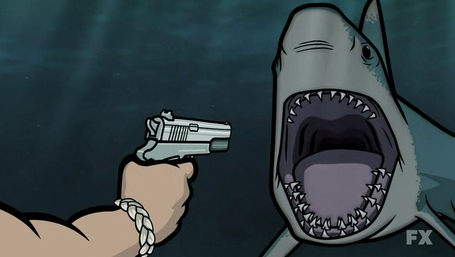 Time for the Canucks to put another solid road win  behind them and focus on the enemy at hand.  Tonight they face the team they man-handled on the way to winning the Western Conference crown, the San Jose Sharks.  And look, the boys in San Jose don't care much for the way our boys play the game, preferring to slide in behind Grandpa Dr. Recchi and his Geritol-addled potshots from the safety of Ponderosa Lodge.  You know what?  Yawn.  Don't care.  Didn't Wee Kyle Wellwood yap at them in the beginning of the series, only to be made the fool?  So if  Douglas Murray has a problem with the Canucks, it shouldn't be perceived arrogance.  It should probably be the way Keith Ballard hipchecked the team that was supposed to be tougher than the Canucks into oblivion.

It's an interesting phenomenon when you think about it.  In this marvelous technological age where history is preserved with the kind of clarity that our ancestors had never imagined in their wildest dreams, there seems to be so many who wish to convince you of things when there's evidence to make them look a tad foolish.  So when Ryan Clowe calls the Canucks whiners, it brings us back to that series in May.  You know, when the Sharks spent more time whinging to the media about the Canucks than actually trying to beat them on the ice.  All the bitching and moaning about diving and dirty play was merely a smokescreen from a tired, frustrated team that got outhit, outworked, outplayed and outclassed.

So once again Clowe, who was all talk and not much else in that series has, along with Murray and their teammates decided to take verbal shots at the Canucks.  Good.  This team is beginning to feed off the hate, and I am quite sure will enjoy jamming down their proverbial throats tonight, despite playing their third game in four nights.  The Canucks are coming off what was probably their strongest performance save for that dismantling of the Blackhawks a couple weeks back, taking one of the NHL's most disciplined, defensively sound teams and making them take foolish penalties, chasing the Canucks.  Yet it wasn't the power play that did the Coyotes in last night, but the Canucks dominant 5 on 5 play, the seeming achilles heel of the team's season to date.

So now the biggest and most successful industry in Vancouver is running at full steam: The Canucks Goalie Controversy Business.  So much ink and blog space, so much airtime on tv and radio.  I am quite frankly disgusted that I have to address this.  Again.  If this team were in a situation like the Anaheim Ducks (more on them later) then I could understand a lot of this nonsense.  But some of the fans and media have entrenched themselves in a battle against each other, uttering the most baffling and bizarre epithets, all over which goaltender on the same bloody team they prefer.  You all come across like those vapid teenage girls getting into slap fights over whether they prefer the sparkly vampire or inexplicably always shirtless werewolf dude from those Twilight abominations.  #TeamSchneider?  #TeamLuongo?  Shut the hell up.  I am #TeamCanucks.  Stop acting like spoiled little brats and be thankful both of our goaltenders have won 3 of their last 4 starts and are guiding this team back from a month where NO ONE played acceptable hockey.

I almost feel sorry for the Anaheim Ducks.  Almost.  You'll forgive me if I have little sympathy for the perils of any team that's won a Stanley Cup of late and is now finding themselves hitting rock bottom.  The Ducks are bloody awful right now, and it's baffling some people.  Last season they limped into the playoffs and lost a dirty, hard fought series against Nashville.  Some suggested that had Jonas Hiller not been out of the lineup since the All Star Break, they might have fared better.  Their play this season shows what utter nonsense that is.  The fact is, the Ducks are overrated, with a slow, porous defence and after their top line plus Teemu Selanne, they have very little to strike fear into the hearts of their opponents.  So what should the Ducks do?  Over at Anaheim Calling, there was suggestion of three things the Ducks will not do: "Fire Bob Murray and/or Randy Carlyle; trade Bobby Ryan, Ryan Getzlaf, and/or Corey Perry; and strip Ryan Getzlaf of his captaincy".  Any more losses and this team may not be exploring one of these options but some type of hybrid.  I am gonna suggest one more: Trade Teemu.  That's right.  In his final season in the NHL, show the man some respect and give him a parachute to escape the smoking, spiraling plane that is the Ducks to a team that will actually give him hope to end his incredible career on a winning note.  Get some more players to build around that aren't just your big 3.  One or more of these moves has to be done.  As much as Anaheim fans wish they could ride this out, they only need look as far as Calgary to see the dangers of a franchise hanging onto GM's, coaches and star players too long.  The longer they wait, the harder it will be to rebuild.  And look at that, there's no Canuck player currently using the #8... While I don't think it was suspension worthy, if I am Brendan Shanahan, I am on the phone with Sidney Crosby this morning having a little chat.  Crosby's elbow to the face of Ottawa's Nick Foligno is unsettling to say the least.  Crosby gets hit enough, and the thought of losing the NHL's marquee player again is bad enough.  But to see him out there inviting karma like that?  Unacceptable.  Stop acting like you have a free pass, Sid.  For your own safety.  The next time you cheap shot someone, it may come back to haunt you...

BAND OF THE DAY- HALLOWS EVE

Another one of those bands you've probably never heard of, yet were pioneers of thrash metal, one of the early torch bearers that paved the way in the early days of the scene.  This Atlanta based band has seen it's share of tragedy in the past, but is still plugging away today.  They put together a few criminally underrated albums, and I would love to hear what they've been up to of late.  Here's a few of my favorite tracks from them: